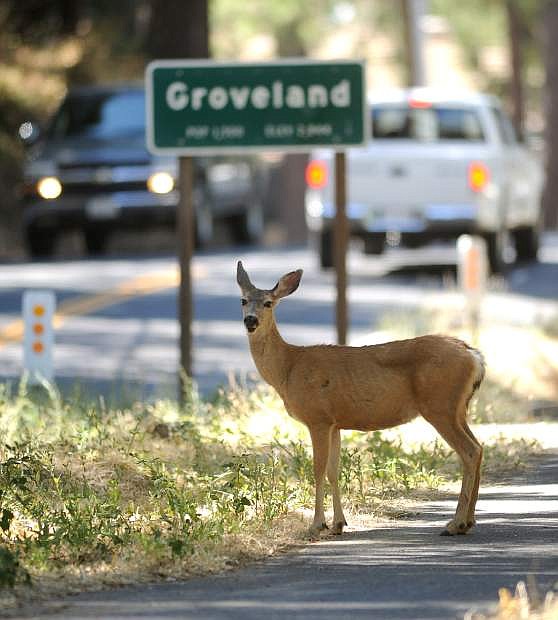 FILE - In this Aug. 26, 2013 file photo, a deer takes refuge alongside the road in the city of Groveland, Calif., on the edge of the Rim Fire which continues to burn in the Stanislaus National Forest. It doesn&#039;t pay to be a dateline in a disaster story, as the folks around Groveland will tell you. On what would have been the busiest weekend of the summer had the Strawberry Music Festival not been cancelled, hotel rooms are empty and the local coffee roaster got rid of all 6 employees because the road to Yosemite is closed. One hotelier has had $20,000 in cancellations just this week. In the park, tourists are enjoying elbow room as hard-to-get campsite and lodging rooms are full but day tourists are staying away out of fear of fire and smoke. (AP Photo /Elias Funez, The Modesto Bee, File) LOCAL TV OUT (KXTV10, KCRA3, KOVR13, FOX40, KMAX31, KQCA58, CENTRAL VALLEY TV); LOCAL PRINT OUT (TURLOCK JOURNAL, CERES COURIER, OAKDALE LEADER, MODESTO VIEW, PATTERSON IRRIGATOR, MANTECA BULLETIN, RIPON, RECROD, SONORA UNION DEMOCRAT, AMADOR LEDGER DISPATCH, ESCALON TIMES, CALAVERAS ENTERPRISE, RIVERBANKS NEWS) LOCAL INTERNET OUT (TURLOCK CITY NEWS.COM, MOTHER LODE.COM)