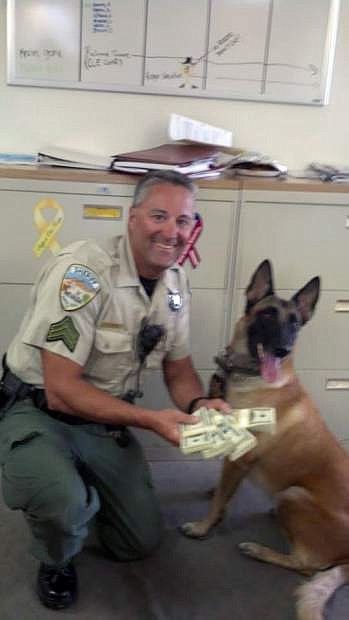 In this image released by the Humboldt County, Nev. Sheriff&#039;s Department in September 2013 and posted on their Facebook page, Sgt. Lee Dove poses with K-9 Zyla and $50,000 cash that was seized after a traffic stop for speeding. Dove is accused of stopping travelers on a lonely stretch of U.S. Interstate 80 and confiscating tens of thousands of dollars for the county without bringing charges, according to two federal lawsuits. Two men who were traveling alone through northern Nevada&#039;s high desert last year offer strikingly similar accounts of their stops by Dove near the town of Winnemucca, about 165 miles east of Reno. (AP Photo/Humboldt County Sheriff&#039;s Department)