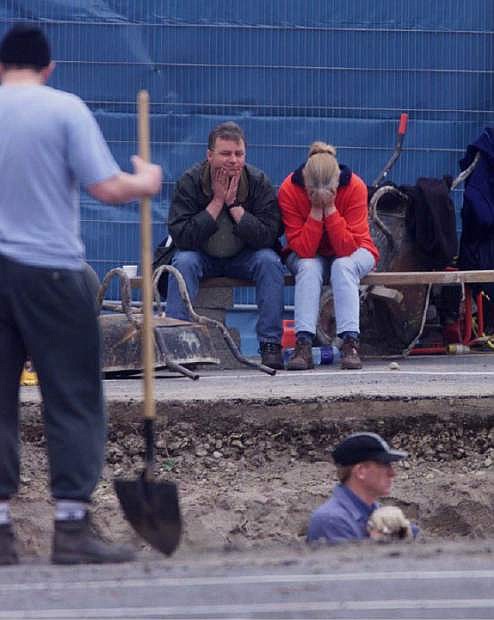 FILE- In this Monday, May 31, 1999 file photo, Helen McHendry and husband Seamus find the agonizing wait for the recovery of Helen&#039;s mother all too much as Irish police continue to search for the body of her mother, Jean Mc Conville, in Dundalk, Irish Republic. Police in Northern Ireland arrested Sinn Fein party leader Gerry Adams on Wednesday over his alleged involvement in the Irish Republican Army&#039;s 1972 abduction, killing and secret burial of a Belfast widow. Adams, 65, confirmed his own arrest in a prepared statement and described it as a voluntary, prearranged interview. Police long had been expected to question Adams about the killing of Jean McConville, a 38-year-old mother of 10 whom the IRA killed with a single gunshot to the head as an alleged spy. According to all authoritative histories of the Sinn Fein-IRA movement, Adams served as an IRA commander for decades, but he has always denied holding any position in the outlawed group. (AP Photo/Peter Morrison, file)