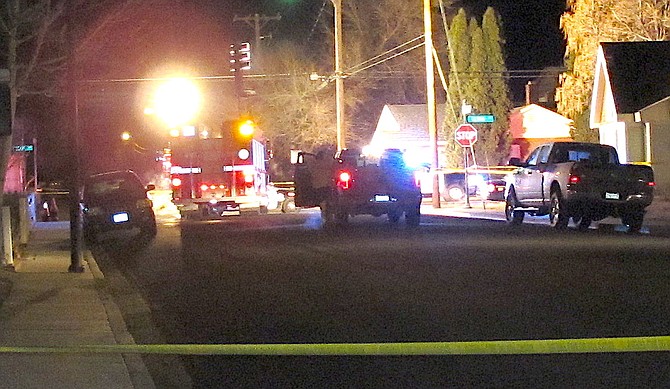 Investigators work the scene of a shooting in downtown Gardnerville in the early morning hours of Dec. 21, 2020.
Photo by Kurt Hildebrand.

A Douglas County Sheriff’s sergeant, who was shot in the face during a Dec. 20, 2020, traffic stop in Gardnerville, said he wanted the shooter sentenced to the maximum to prevent future victims.

Sgt. John and Lauren Lenz both took the stand on Monday to seek the maximum sentence against shooter Nicholas Berreman.

Lenz said bullet fragments from the shooting remain lodged in his spine and may affect his long-term health.

He said he was testifying for all of Berreman’s victims, both past and future.

“I love my life and I’ve worked hard to make it a life worth living,” Lenz said. “He tried to take my experiences and my future from me and turn them to ash.”

Lauren Lenz said there was only a millimeter between her testifying as Lenz’ wife or being his widow.

After hearing from the Lenz, his wife and two deputies, District Judge Tom Gregory sentenced Berreman to the maximum possible 61 years in prison.

Berreman, 23, faces a minimum sentence of 292 months, which is slightly longer than 24 years. The sentence will be served consecutively to whatever time Berreman has left to serve in California on a charge of felony assault on a peace officer.

“The degree of depravity and danger to the community warrants the maximum sentence,” Gregory said. “This was a traffic stop where you engaged in a firefight at the get-go.”

Berreman had been drinking on Dec. 20, 2020, when he was riding in a vehicle driven by a relative.

Driver Kaela Mae Horse Berreman told Carson City investigators that she picked up Berreman in Minden and went to Gardnerville to pick up liquor.

Deputies were aware that Berreman had a warrant for his arrest after he absconded from parole in California.

Deputy Justin Fricke said he first encountered a 17-year-old Berreman in 2015 and that he believed that Berreman had embraced a criminal lifestyle. Fricke pulled Berreman over on Dec. 20 and was awaiting backup. When Lenz arrived and got out of his patrol vehicle Berremen opened fire, hitting Lenz in the face.

“I’m extremely proud of Sgt. Lenz and my officers, and I’m pleased with the court’s decision,” Sheriff Dan Coverley said after the sentencing. “Douglas County is a safer place because of the court’s ruling today.”

Defense attorney Brian Filter said Berreman had expressed remorse to him and asked the court for some measure of mercy.

Berreman said he was glad Lenz survived the shooting.

“I’m grateful that both of us walked away from this,” he said. “I can’t take back what happened. I’m willing to take whatever happens.”

She contended that Berreman was proud of his actions and that he thought he would gain a level of street credibility in prison.

Mazza pointed out that the shooting occurred in a populated portion of Gardnerville and that one of Berreman’s bullets lodged in a nearby house.

Lenz was only hit once, she said. That bullet entered his cheek and broke his jaw and hit a molar, which added to the shrapnel that pierced his tongue and wound up in his spine, causing paralysis.

Lenz was hospitalized over Christmas, having his jaw rebuilt and wired shut.

His most recent surgery was two weeks ago, and he said it’s likely fragments of Berreman’s bullet would be lodged next to his spine for the rest of his life.