Valmy: Small in stature but big in stories 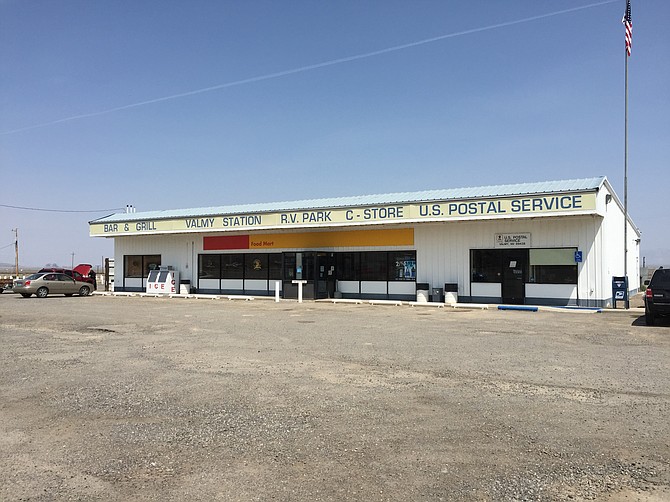 At first glance, the tiny enclave of Valmy, located about 35 miles east of Winnemucca, doesn’t appear to consist of much more than a large service station with an RV park. But there’s far more to its story.
A railroad stop was established here in the 1890s to provide water and fuel for passing trains. Due to the presence of springs in the area, it long had been the site of many battles between rival Shoshone tribal units sparring over the water. In fact, because of those skirmishes, it was named after a famous French battle site.
Records indicate that a post office opened at another nearby railroad stop called Stone House in 1890 but was relocated to Valmy in 1915. Sometime in the early 20th century, a small gas station, store, bus stop and post office opened on the site.
In 1932, an entrepreneurial 19-year-old named Eugene DiGrazia purchased what he described in a 1987 article in the Los Angeles Times as “the whole works” from a school teacher for $1,800. He later purchased 140 surrounding the complex for $2,100.
DiGrazia told Charles Hillinger of the Times that when he purchased the property it “had only one pump and in the beginning cars and trucks were few and far between. A narrow two-lane road went through here.
“Gas sold for 25 cents a gallon. I paid 19 1/2 cents for it … bread sold for 10 cents a loaf, milk 10 cents a gallon,” he continued. He said his most regular customers were miners working nearby diggings who rode into the settlement on burros.
“President Herbert Hoover stopped here in 1940. He was interested in a gold mine near here,” DiGrazia told Hiliinger. “He bought gas, bought some candy and used the outhouse. He stood around and talked for a while.”
For the next 58 years, DiGrazia and his wife, Julia, operated what was known as the “Valmy Auto Court.” Over the years, the property expanded to include a small café called “Gene’s Golden Grill,” a six-unit motel and two trailer parks on 63 acres.
By the 1980s, after a large coal-powered power plant was opened a few miles away, the trailer park was home to nearly 100 people, most either gold miners, DiGrazia’s employees or workers at the power plant.
DiGrazia, affectionately called the Mayor of Valmy, served as postmaster, fire chief, and just about every other civic job in the tiny community. He even established the Valmy Water Co. to provide free water to residents from a 10,000-gallon galvanized iron tank that was built over a well next to the railroad tracks. It had originally been used to water steam locomotives.
Valmy probably had its most significant brush with fame in the early 1980s after rock icon Bruce Springsteen posed for an album cover photo in front of Valmy’s 1930s-style gas station/general store (it was used on the cover of a live album released in Britain). For years, a copy of the album cover signed by Springsteen hung on a wall in the store.
Over the years, DiGrazia was the subject of countless newspaper and magazine articles. For many years, he wrote a column about the comings and goings in the community, titled, “The Valmy Badger,” which appeared in the Battle Mountain Bugle newspaper.
After DiGrazia’s death in 1990, Valmy was sold and the old classic wooden Shell station was replaced with a more contemporary fabricated building. While the charm of the old place is gone, you can still get gas and food in Valmy — or park your mobile home or mail a letter. Julia DiGrazia moved to Reno, where she died in 2002.