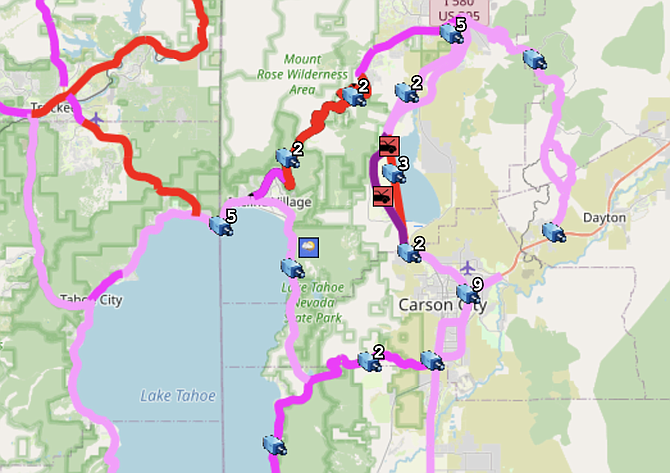 Major highways are closed Monday morning as a severe winter storm has dropped a number of inches of snow on top of already icy roads. The wind closed I-580 through Washoe Valley on Sunday and today the road remains closed. Check www.nvroads.com before traveling.

The University of Nevada, Reno, canceled in-person classes for today and told office workers to stay home.
Chains or snow tires are required on the highway from Topaz Lake to Hallelujah Junction, where both its north and south sides are closed in California. Highways 50 and 88 are closed through the Sierra, as is Interstate 80.

A winter weather advisory is in effect through 7 p.m. today with 3-6 inches of additional snow expected.

Chains or snow tires required across many Truckee Meadows highways this morning.

If you don’t have to travel, stay home.

If you must drive, check https://t.co/j1HkXG50aR first for chain controls and traffic cams. Then, leave early and TAKE IT SLOW in ice and snow. pic.twitter.com/X1rEazDFtn 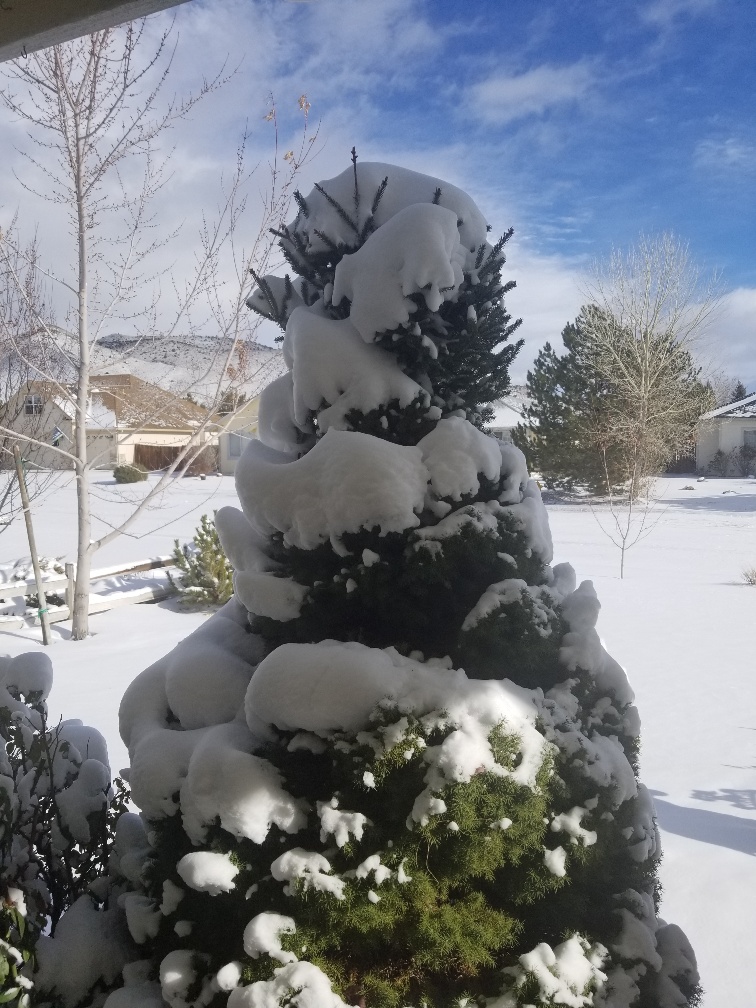 Gov. Steve Sisolak has closed state offices on Monday in Carson City, Douglas, and Washoe county areas. Sisolak said the offices are closed because of the snow and wind forecast.

Due to heavy snow and wind forecast to continue through Monday, @nevadadot and @NV_StatePolice are reporting dangerous road conditions in the Carson City, Washoe County and Douglas County areas.

As such, state offices in these areas will be closed Monday.

COLFAX, Calif. (AP) — A major Christmas weekend storm caused whiteout conditions and closed key highways amid blowing snow in mountains of Northern California and Nevada, with forecasters warning that travel in the Sierra Nevada could be difficult for several days.

Authorities near Reno said three people were injured in a 20-car pileup on Interstate 580, where drivers described limited visibility on Sunday. Further west, a 70-mile (112-kilometer) stretch of Interstate 80 was shut until at least Monday from Colfax, California, through the Lake Tahoe region to the Nevada state line.

The California Department of Transportation also closed many other roads while warning of slippery conditions for motorists.

“Expect major travel delays on all roads,” the National Weather Service office in Reno, said Sunday on Twitter. “Today is the type of day to just stay home if you can. More snow is on the way too!”

The weather service issued a winter storm warning for greater Lake Tahoe until 1 a.m. Tuesday because of possible “widespread whiteout conditions” and wind gusts that could top 45 mph (72 kph).

⚠️Eastlake Blvd in washoe valley between Douglas Dr and I580 is closed due to a multi car accident and 3 foot snow drifts. #TMFR Crews on scene. @WashoeSheriff


Strong winds plus snow= low visibility.
Do not travel this evening if you don’t need to. pic.twitter.com/bUQrsEejpo


Wind gusts today could reach 50-60+mph range across far western Nevada and through the Sierra. Wind gusts easily over 100 mph are expected today on the mountain ridges, the National Weather Service says.
Stay safe and avoid any unnecessary travel. Check with CalTrans and NDOT as there are numerous road closures.
CalTrans: http://quickmap.dot.ca.gov/
NDOT: https://nvroads.com/

IR-580 in Washoe Valley is currently shut down in both directions due to multiple crashes. Drivers should expect lengthy delays and use alternate route if safe to do so. Unknown time to reopen. Avoid driving today if possible. Stay safe Nevada.