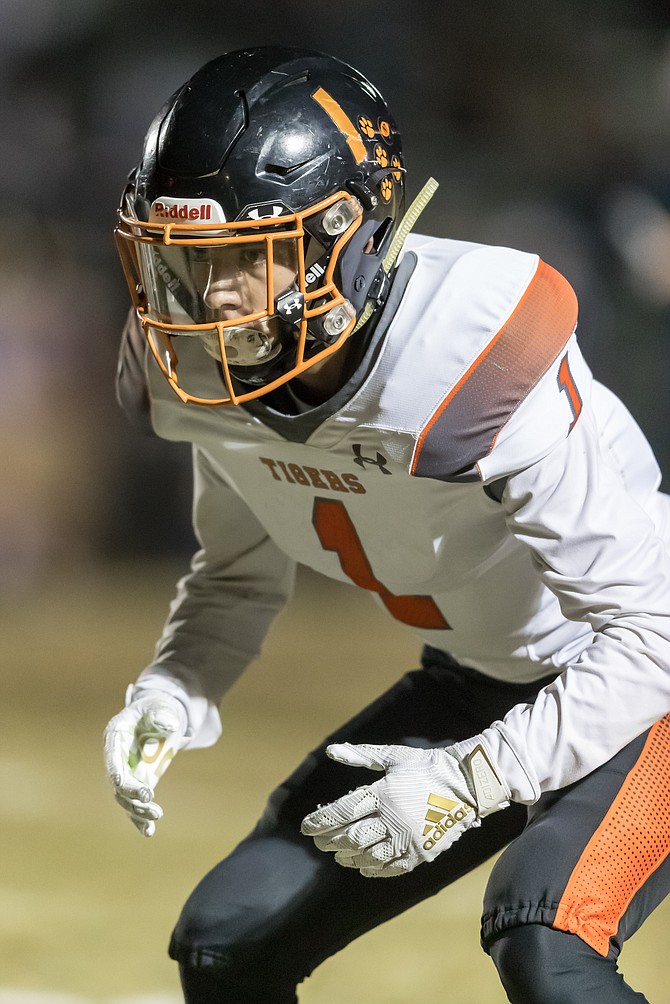 Douglas High cornerback Wyatt Grisell sits down pre-snap in a contest during his junior season. Grisell signed his National Letter of Intent to continue playing football at Wisconsin Lutheran College next year. Photo by Ron Harpin.

Douglas High senior Wyatt Grisell has always hoped for a chance to play football collegiately.
Though he could have been classified as an undersized defensive back early in his career, his first year on the varsity field opened up possibilities to the wide world of college athletics.
Last week, Grisell inked his official commitment to Wisconsin Lutheran’s football program, a Division III program just west of Milwaukee.
“As I went through high school, it became more apparent I could get it done. Making that decision and taking the next step, going to the next level is a really big part of my life and is an awesome feeling,” said Grisell. “It’s a huge decision for me and my family.”
Showcasing work ethic
Back in August, Grisell got to showcase his abilities on the field at the Best Coast Showcase in Reno.
At the time, the cornerback had put on 15-20 pounds of muscle, but has kept pushing himself to new limits.
In December, he garnered a little more recognition as Douglas head coach Ernie Monfiletto posted a video of Grisell hitting a new squat max in the weight room.
“It’s such a great feeling, especially if it’s a weight you get stuck at for a while,” said Grisell. “I’ve seen the biggest gains I’ve seen in my life.”
Monfiletto had even more praise for the outgoing senior.
“I think they’re getting a great player. Wyatt is a kid who has really jumped a ton, as far as ability goes,” said Monfiletto. “I think he’s going to have a great opportunity to be productive and be an important part of that program.”
Grisell forced a fumble in his junior season and recorded 10 tackles in five games played.
If Douglas is able to get in a six-week football season, Monfiletto feels the best from Grisell is still yet to be seen in live action.
“What he lacks in size, he makes up for in heart and hustle,” Monfiletto said.
Heading northeast
The snow isn’t too much of a bother for Grisell who, like two of his fellow teammates headed to North Dakota, will be in a colder environment than Northern Nevada.
In the mind of the Tiger senior, what’s a little more potential snow compared to a chance at accomplishing a dream?
Wisconsin Lutheran, which plays in the Northern Athletic Collegiate Conference (NACC), showed initial interest in Grisell and the rest has fallen into place nicely.
“I was pretty excited because that was at a point where I wasn’t sure if I was going to get any offers soon. I had a good phone call with him (coach Andrew Flegel) and then he offered me. … They did good with taking the stress off of me and letting me navigate what I wanted to do and it really worked out in the end.”
Grisell is hoping to make his first trip out to his new home in April and his tentative plans are to study in the realm of business or marketing.
In the meantime, the newest Warrior is making sure he’s appreciating the journey.

“(My coaches) all believed in me to be the best player I can be,” Grisell added. “It’s great to have support like that throughout high school.”