Michelle Palmer: For hamburgers, it is all about the buns (recipe) 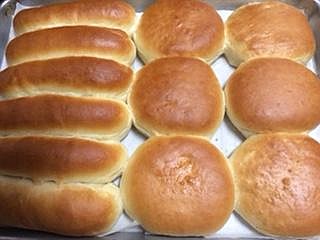 Burger Season started July 4 in my family. As far back as I can remember we always were cooking in the back yard with our dad (first-born American on my grandpa’s side. Grandpa was from the Black Forest of Germany) on the barbecue.

Tori Avey in Parade on Sept. 6 had this to say about the origin of the hamburger:

You may have heard that Hamburg, Germany is the home of the first hamburger. While the inspiration for the hamburger did come from Hamburg, the sandwich concept was invented much later. And, in fact, the concept of minced beef likely predates Hamburg, according to some. It could be no more than urban legend, but some contend that Mongol horsemen first ate a similar style of beef, steak tartare, in the 12th century. The trend made its way through the trade routes via Russia before landing in Germany.

Where all hamburger origin stories agree is this: By the 19th century, beef from German Hamburg cows was minced and combined with garlic, onions, salt and pepper, then formed into patties (without bread or a bun) to make Hamburg steaks. These early burgers were considered gourmet and were quite pricey, given the quality of Hamburg beef.

When German immigrants began arriving in New York and Chicago, many earned a living by opening restaurants. Menus frequently featured Hamburg steak, an Americanized version of the German offering. It was often the most expensive dish on the menu.

During the Industrial Revolution, factory workers were served Hamburg steak from food carts. They proved difficult to eat while standing, so one creative cook sandwiched the meat patty between two slices of bread (the culinary innovator’s name has sadly been lost to history). No matter its true origin story, throughout the years hamburgers have become a symbol of American cuisine, though they are loved the world over.

To read the full article, go to https://parade.com/61481/toriavey/where-did-hamburgers-originate.

Heat milk, water, and butter in a small pot to 120 degrees
In a separate large bowl whisk 1¾ cups of the flour, yeast, sugar, salt.
Stir heated milk mixture into the flour mixture, and then add the egg, stir to fully combined.
Add ½ cup remaining flour at a time stirring until fully combined after each addition.
When all flour has been added turn onto a lightly floured surface, knead for about 8 minutes until smooth and elastic.
I weigh out the dough at this point and divide by twelve to get the same weight of each piece.
Roll each into a ball then shape each piece into a 3 ½-inch disk. (I very lightly oil my hands)
Place on a lightly oiled sheet pan 3-4 inches apart.
Cover with a tea towel for 20-25 minutes and place away from drafts. Preheat oven now 400 degrees while buns rise.
If you like you can brush with egg wash and top with sesame or poppy seeds.
Bake 10-12 minutes until golden!
Cool before slicing with a bread knife.
You will never buy store bought again…
Enjoy!
Michelle Palmer has been cooking in the area for over three decades, Owner of Absolutely Michelle’s Chef-for-Hire.