Some Douglas County residents warned to prepare for evacuation 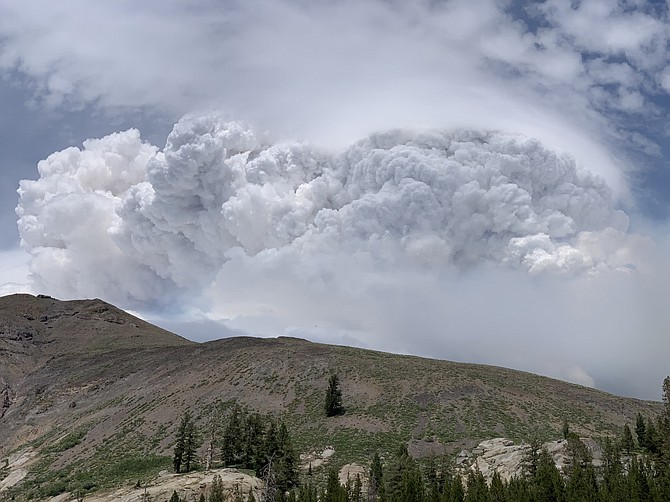 Michael Smith took this photo of the Tamarack Fire's smoke plume from Blue Lakes, which was evacuated on Monday.

The possibility that the Tamarack Fire may burn into Douglas County has prompted a notice to residents of neighborhoods along the state line they may be asked to evacuate.

Residents of Fredericksburg, Foothill to Centerville, Holbrook, Double Spring, Ruhenstroth, Leviathan Mine, Pineview Estates and China Spring are on the list.

“We are asking residents to stay vigilant, pay attention to emergency phone alerts, and have a plan in place for evacuations,” county spokeswoman Melissa Blosser said in a statement issued at 11 a.m. “In addition, plan for power outages and road closures in the area. Have a transportation plan for animals and livestock. Think about fuel, medications, keepsakes, and groceries you might need. Think about your loved ones on oxygen or anyone who may need assistance leaving their home.”

Evacuations in Nevada may only be ordered by the governor, so any evacuation would be voluntary.

Residents will be notified by first responders going door to door, Reverse 911 and other means.

Firefighters worked Monday into Tuesday to prevent the blaze from crossing into Nevada as it has grown to an estimated 42,000 acres and remains at zero containment.

The Bald Mountain camera in the Pine Nuts showed active flames through the night as a portion of the fire burns up the East Fork of the Carson River and threatens to cross the state line.

At dawn, the Hawkins Peak fire camera showed smoke was starting to lay down a bit after days of flames visible on the ridgeline.

At a briefing for residents on Monday, Alpine Fire Chief Terry Hughes said that fire is burning in two directions toward Monitor and into the Burnside Lake area.

“We are 100 percent focused on stopping this fire,” Alpine Sheriff Rick Stephens said.

Stephens thanked residents for their cooperation in the evacuations.

“All of you did a fabulous job and got out of harm’s way,” he said.

Fire mapping confirms the fire has split heading in three directions, with hotspots showing near Woodfords, and into the East Fork Fire burn area toward the Nevada state line.

Stephens said as soon as an emergency operations center hotline has been established, residents would be able to call to find out the status of their homes.