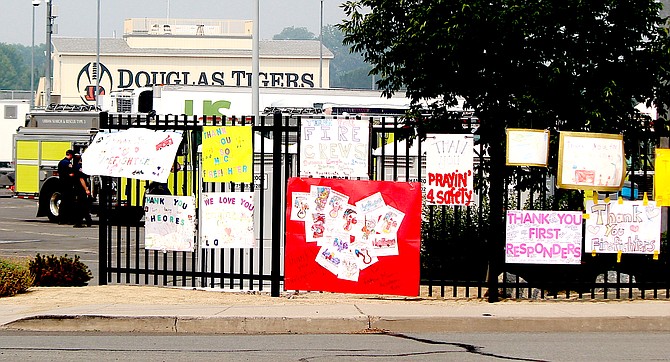 Signs thanking firefighters on Saturday and urging them to stay safe line the fence at Douglas High School where they are staged for the Tamarack Fire.
Photo by Kurt Hildebrand.

While evacuations were lifted for Mesa Vista on the north end of the Tamarack Fire, conditions are still too hazardous to even allow escorted traffic along Highway 395 from China Spring south.

An estimated 2,439 people have been evacuated as a result of the fire.

“Currently, it is not safe to escort the public through the Highway 395 road closure from China Springs Road to state line or to provide escorts to the area,” Douglas County Spokeswoman Melissa Blosser said. “The Douglas County Sheriff’s Office would like to remind those who chose not to evacuate, that if they leave the area, they will not be allowed back in.”

Sheriff’s deputies are actively patrolling the area monitoring for criminal activity or misconduct.

Power restoration for 287 homes and businesses along the Highway 395 corridor has been delayed until 8:45 a.m. Monday, nvenergy.com reported on Saturday morning.

The Tamarack Fire officially grew to 65,152, according to the U.S. Forest Service.

Mesa Vista residents must show proof of residence to get through the roadblock on Highway 88 and the state line.

As of 2 p.m., air quality in Minden is at very unhealthy levels due to smoke from the Tamarack Fire.

Winds are expected to pick up around 6 p.m. out of the west to 15-20 mph, which may help clear some of the smoke out of Carson Valley.

“While there could be some improvement in the afternoon and evening thanks to mixing and weak westerly flow, smoke is expected to filter back in as flow turns northwest-north overnight. 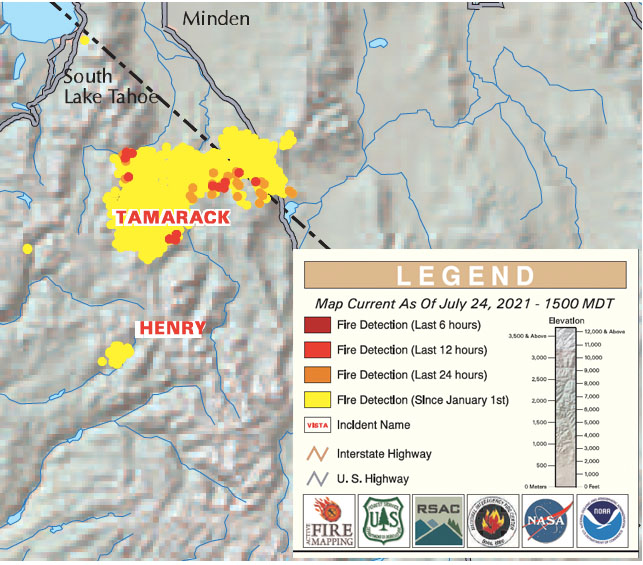 Power restoration for 287 homes and businesses along the Highway 395 corridor has been delayed until 8:45 a.m. Monday, nvenergy.com reported on Saturday morning.

The Tamarack Fire officially grew to 65,152, according to the U.S. Forest Service.

Lighter winds on Friday gave firefighters an opportunity to cut new containment lines on the northeast and northwest sides of the fire, while hand crews directly fought the fire on several fronts.

Along the eastern salient, heavy air support and crews on the ground were able to stop the fire’s growth.

Containment continues to be 4 percent, due mainly to the fire getting bigger, officials said.

An estimated 2,439 people have been evacuated as a result of the fire.

Power was restored to Topaz Ranch Estates around 11 p.m. Friday but remains out to the Highway 395 corridor.

NVenergy.com reports that there are 288 homes and businesses without power as of 7 a.m. Saturday due to the Tamarack Fire.

While restoration of power depends on the fire, the estimate is 1 p.m. today.

The Tamarack Fire spans 20 miles from its point of origin in the Sierra Nevada near the top of Pleasant Valley Creek to Bald Mountain in the Pine Nuts. The fire is named for Tamarack Lake, which is west of the origin.

First reported as a single tree on Independence Day, the fire grew from a quarter acre on July 10 to 40 acres before it blew up on July 16.

The Alert Wildfire camera on Bald Mountain in the Pine Nuts showed the fire burning less vigorously than over previous nights as the fire moved into lighter fuels and had there was less wind.

The Nevadafireinfo.org showed hot spots reaching south along the state line along ridge on the west side of Highway 395. While those hot spots don’t necessarily equate actual flames, they have predicted which way the Tamarack Fire has historically burned.

The map indicates hot spots all along the southern front of the fire’s Nevada salient, and also on the far south end toward Highway 4.

Officially, the fire is at 59,112 acres, according to Saturday morning’s situation report and containment remains at 4 percent between Highway 89 and the West Fork of the Carson River in Alpine County.

The cost to fight the fire hit $11.1 million with 1,425 firefighters, mostly working in the 31 twenty-member handcrews and 108 engines.

Smoke from the fire sent visibility at Minden-Tahoe Airport down to 4 miles through Saturday morning. Air quality at the Nevada Department of Environmental Protection’s monitor in Ranchos Aspen Park was on the cusp of deteriorating from unhealthy to very unhealthy at 7 a.m.