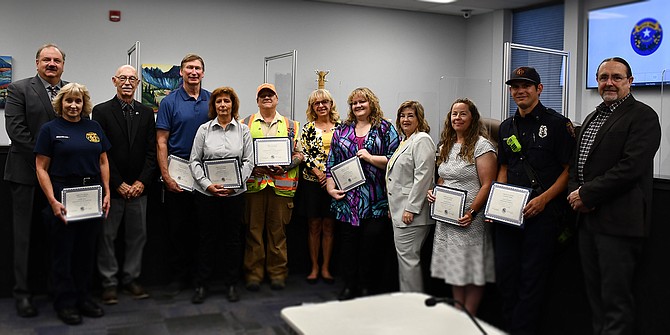 City employees stand for a group photo with the Board of Supervisors. For the first time since the pandemic, Mayor Bagwell was able to hand out Length of Service certificates in-person.
Submitted

With a line of deputy sheriffs filling the Community Center board room (and one K9 to top it off), the Board of Supervisors unanimously approved an updated collective bargaining agreement between Carson City and the Carson City Deputy Sheriff’s Association.

The new five-year contract guarantees salary raises for employees who “meet expectations” annually. It assures a doubled base rate pay for working holidays and lifts the maximum accumulated annual leave to 300 hours. Other changes include wording adjustments to sick leave, retirement, and additional pay policies.

The agreement is effective through June 30, 2026 and has an estimated fiscal impact of $1.9 million.

The board also appointed two new members to the Library Board of Trustees. Though they had five applicants, two withdrew their candidacy (including Amanda Long, who would have been a returning member), and one was unable to attend the interview. Hence, by no contest, the board unanimously appointed local residents Sarena Nichols and Elizabeth Markle.

The board also approved a slew of new contracts and financial agenda items, including:

• A resolution to extend benefits for unclassified city employees. Negotiations regarding a new collective bargaining contract with the Carson City Employees Association are ongoing.

• Adoption of a new insurance provider for city employees and retirees. Anthem Blue Cross and Blue Shield extended a contract that preserves employee benefits at a 3 percent rate decrease, compared to the city’s previous insurance contract.

• A $1.1 million insurance plan through the Nevada Public Agency Insurance Pool. The agreement extends a variety of coverage, including property insurance, cyber insurance, and liability coverage plans, among a long list.

Regarding new development projects, the board approved a final subdivision map for Blackstone Ranch Phase 1-A. The plans outline 66 new single-family lots. The board also approved a re-zoning action between Bedford Way and Kensington Place, changing the area to a single family 1 acre planned unit development. White voted no on this measure.

Additionally, the board heard two special presentations. Walker & Associates spoke on the recent legislative session, highlighting notable bills. They thanked Mayor Lori Bagwell for her support of AB270, which provides funding for the preservation of the Nevada State Prison and the Stewart Indian School.

All the way from UNR’s extension office in Clark County, economist Joe Lednicky came to speak on the Nevada Economic Assessment Project, a data repository collection effort. He and his colleagues are helping communities throughout Nevada use survey data to spur economic growth. The board was interested in how the repository might help Carson City in the future.

Among the consent agenda, the board approved all but two items in one sweeping motion. Most were routine budgetary matters.