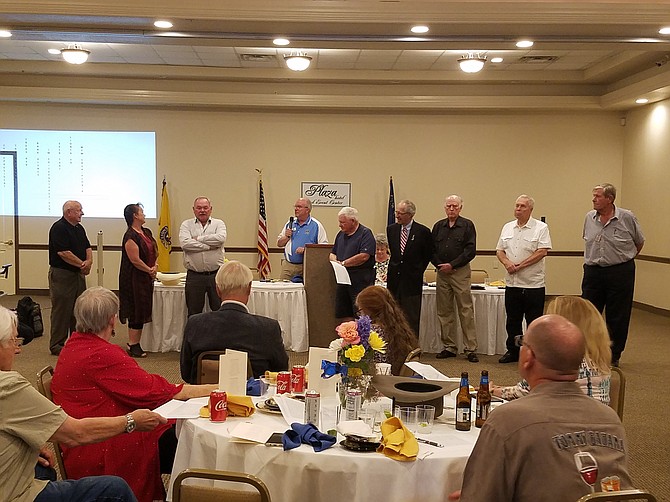 New officers of the Carson City Host Lions Club were installed on June 16 at a dinner and awards ceremony held at the Plaza Convention Center in Carson City.
Past District Governor Cliff Cooper from the Reno Host Lions Club presided over the installation of Terry Rubald, president; Carol Earle, first vice president; Diane Abbott, second vice president; Phil Christopherson, secretary; Tim Rubald, treasurer; Dan Walkenshaw and Travis Skaggs, one-year directors; Vince LoPresti and Doug Mickelson, two-year directors; Lou Skaggs, membership chairman; Ken Lloyd, tail twister; and Sam Herceg, lion tamer.
Immediate Past President Kathy McClintock presented two Lions Student Speaker Foundation Fellowships to Lions Tim Kniffen and Phil Christopherson for their work for Lions and the community. The Fellowships represent contributions to the Student Speaker Foundation for scholarships given to high school students who compete in the annual Student Speaker Contest.
McClintock also presented a Canine Companions for Independence Abdul Award to Terry Rubald for her work for the Lions Club. Canine Companions provide trained dogs to persons with disabilities to assist them in gaining greater independence, and the Abdul Award is a contribution to help provide equipment and supplies for the regional training center.
Lion Ken Lloyd was presented with the Mel Woodgate Memorial Award, for his work in making Lions meetings fun and light-hearted. Lion Lou Skaggs was named Lion of the Year for all her many, many contributions to Lionism, from chairing the See’s Candies sales to making sure our “adopted” seniors are remembered at Christmas.
Past President Tim Kniffen presented Lion Kathy McClintock with the Melvin Jones Fellowship for her hard work as president during a year beset by the pandemic. Jones founded the first Lions Club in 1917 in Chicago and Lionism has since grown to 47,000 clubs around the world. The Fellowship represents a significant donation to Lions Clubs International Foundation, which in turn provides grants locally and internationally for disaster relief, prevention of blindness, and a variety of humanitarian causes.
The highlight of the evening was the recognition of two Lions who together have served in Lionism for 104 years. Lion Ray Masayko is a 50-year member who began his career in Lionism in 1970 with the Hawthorne Lions Club. He served in several elective offices there including president before transferring to the Carson City Host Lions Club in 1984. In Carson City, he also served as president in 2013-14.
Lion Doug Mickelson is a 54-year member who became a Lion in 1967 when he joined the Rochester, Michigan Lions Club. He transferred to Carson City Host Lions in 1983, where he has served as treasurer at the club and district levels for 30 years.
Both Lions were recognized for their service with a contribution in their names to Camp Dat-So-La-Lee, which is a summer camp for underprivileged children sponsored by Lions clubs of District 46. The camp sustained major damage in 2019 in the Lamoille Canyon fire, with 10 of 16 buildings destroyed. The contribution made on behalf of Lions Masayko and Mickelson will help the rebuilding efforts.