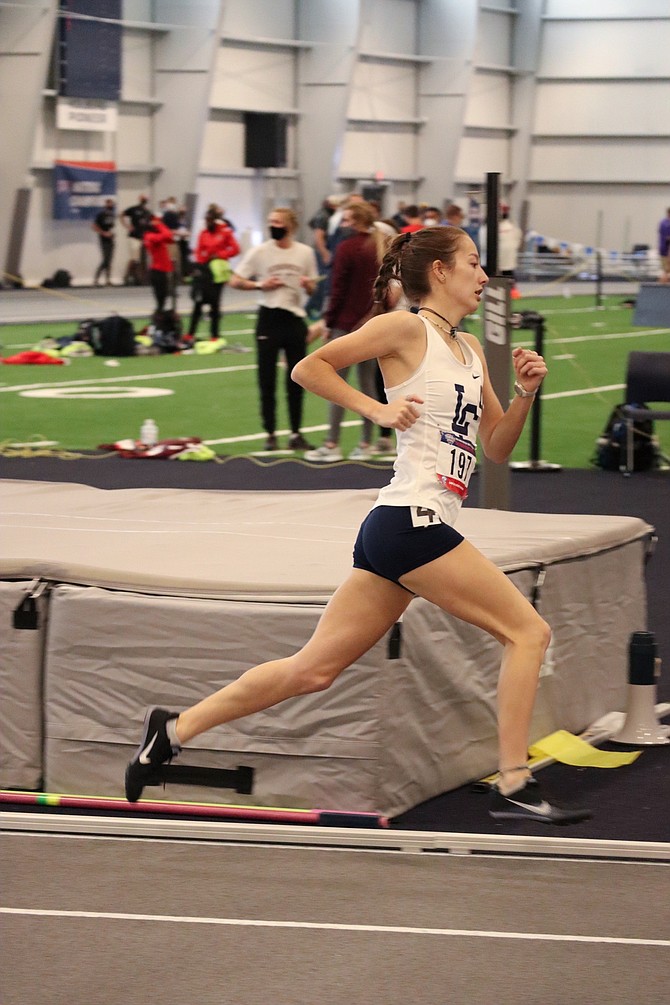 Ashley Britt had only run the 600-meter dash twice in her career before competing at the NAIA Indoor National Championships last weekend at Mount Marty University in South Dakota.
The 2019 Carson High graduate and current Lewis-State State College sophomore didn’t flinch in her new event, taking eighth and picking up All-American honors in 1:39.42.
It was one of two All-American awards the Northern Nevada native picked up as she also anchored the final leg of the Warriors’ 4x400-meter relay team.
After her 4x4 team made it through initial qualifying, the Carson grad used her final kick to help the Warriors take eighth in the relay final.
“I was pretty shocked. I didn’t really believe it at first,” said Britt. “I never thought it would happen.”
It was a strong day for the rest of Britt’s team as L-C State College put together an accomplish the program hadn’t seen before.
“This will be our first time ever taking home double-digit numbers in All-American awards and it was done totally by our women,” said head coach Mike Collins in a press release.

Venturing to Idaho
Initially, Britt’s interest in going to college away from home was limited.
Since she’s arrived in Lewiston, Idaho the Northern Nevada transplant found it was a step she needed to take.
“It’s actually very nice. I love it,” Britt said. “I am so glad that I chose to come out and start living outside of home. It’s definitely made me grow a lot more.”
Her transition to her new home was also fueled by her want to pursue a potential nursing career path.
A self-proclaimed lover of traveling, Britt enjoyed the adventure of Nationals being in South Dakota, especially after 12 months of living through a pandemic.
“It was kind of like a vacation, but it was also work. It was really fun. It was nice to get out and enjoy your teammates,” Britt added.

Chasing everyone down
Britt didn’t just show up an take home All-American honors.
While running at Carson High, Britt dealt with a condition called pectus excavatum, which forced her to have corrective surgery on her chest.
For two years, Britt was forced to work through having a bar in her chest to fix the condition.
“My chest grew in. It was kind of like a dent in my chest. I got it corrected. They put a bar in my chest and kind of popped it out,” said Britt. “I was able to run but I think it pushed me back a little bit. I’m still continuing to PR and get better now. Mainly, because I never got that chance my sophomore or junior year.”
Even with the surgery, by the time the bar was removed for her senior year she was already turning heads as a hurdler.
Britt was modest in her accomplishments, noting that she’s still trying to shave her average 400-meter split times down from around 58.4 seconds.
“If it’s a good race and good teams, you’re probably going to be right next to people. I love chasing people down and being really close,” said Britt. “It’s an adrenaline rush.”
Her out of season training may be the most unique aspect of all, serving as a wild land firefighter during the summers.
“It kind of runs in my family. My mom did it while she was growing up. My dad did it. I’ve always heard these stories and I kind of wanted to try it out for myself. I love the outdoors and getting out and it suits me perfectly,” said Britt. “We do a lot of hiking. It actually helps me out with track because it gets me in good shape.”
This summer she will be employed by the forest service and will be working on an engine in Jacks Valley.
It seems only fitting that after taking home two All-American honors and summer plans taken care of, Britt’s focus was back on the track.

“Since we only had an indoor season last year, I only got to do 60-meter hurdles. So, I think two weeks from now I will get to run my first 400 hurdles race. It’s exciting.”