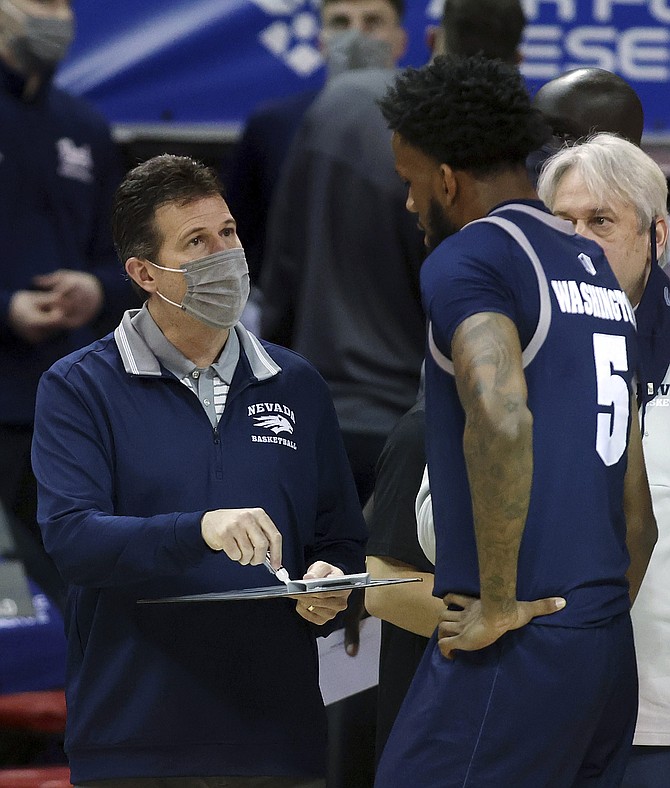 Grading the Nevada Wolf Pack’s 89-82 victory over the Boise State Broncos and 77-70 loss to the San Diego State Aztecs on Thursday, Friday in the Mountain West Tournament in Las Vegas. . . .

Sherfield’s 25 points against San Diego State on Friday were a bit misleading. Yes, they certainly look good on the stat sheet but they are empty calorie points just the same. Sherfield had just six points at halftime, all on free throws, after missing all six of his shots in the first half. He then scored 11 points in the last 9:38 as the Pack did little more than keep the score respectable. He missed three straight shots while the Aztecs were building their lead to 60-47 midway through the second half. The Pack point guard was just 6-of-15 from the floor against the Aztecs, padding his numbers at the line (11-of-14). The night before against Boise, though, Sherfield was brilliant, despite turning the ball over five times. He scored just one more point (26) against the Broncos than he did against the Aztecs, but he was much more efficient, draining 8-of-14 shots and making all three of his 3-pointers.

The two Pack stars (Sherfield, Cambridge) seemed to feed off each other in Las Vegas.  But Cambridge was even better against Boise State and less efficient against San Diego State than Sherfield. Cambridge was 11-of-19 from the floor against Boise, making 4-of-8 threes and also had five rebounds, two blocks and two steals for 31 points. It was one of the best individual performances by a Pack player this year. Against San Diego State, though, Cambridge missed 11-of-15 shots, 7-of-9 threes and turned the ball over five times while scoring 17 points. He turned the ball over twice in the first 47 seconds of the game, setting the tone for the entire evening.

Washington had a standout tournament and served notice that he will be a force in the Mountain West in the coming years. The 7-foot center had 19 points on 6-of-9 shooting with nine rebounds against San Diego State. He was even better against Boise State, scoring 18 points on 8-of-13 shooting with 11 rebounds. Washington devoured San Diego State’s 6-10 center Nathan Mensah.  Mensah took no shots against the Pack and didn’t score a point while fouling out in just 14 minutes. He had 31 points in two games against the Pack in January. Washington produced his 37 points and 20 rebounds in his two tournament games (along with just five fouls and two turnovers) in just 54 minutes.

Coleman’s first Mountain West Tournament was one to forget. The 6-7 freshman played 55 minutes in the two games but was just 2-of-8 from the floor (no free throws) for five points. The Pack desperately needed a No. 3 scorer against San Diego State with Sherfield and Cambridge struggling and Coleman didn’t score a point in 22 minutes. But it’s hard to score when you are on the bench with foul trouble (four). Coleman now has been called for four fouls in five of his last seven games. Coleman did have nine rebounds and seven assists in the two games so he didn’t quit working. It was a learning experience for the talented freshman.

The 6-6 freshman played 57 minutes in the two games and produced just five points on 1-of-5 shooting, though he did have 10 rebounds. Foster was solid against San Diego State defensively with eight rebounds and two blocks despite fouling out after just 28 minutes. He also scored four points. Against Boise State, though, he had one point in 29 minutes and missed all three of his shots with just two rebounds. It’s hard to win a postseason tournament when two of your starters (Foster, Coleman) contribute next to nothing offensively.

Hymes was on the floor for just 21 minutes in the two games combined and scored seven points with five rebounds. He fouled out in just nine total minutes against Boise State, though he also jammed those nine minutes with five points, three rebounds, four free throws and two turnovers. Hymes managed to stay on the floor for a dozen minutes against San Diego State (just two fouls) and had two points and two boards. Hymes had 17 points in 22 minutes against Boise State on Feb. 5. Over his next four games, though, the 6-10 sophomore has produced 16 fouls, 16 points, eight rebounds and four turnovers over 45 minutes.

Milling disappeared in the two games, scoring just three points in 42 minutes. He was 1-of-8 from the floor (1-of-5 on threes) and was called for seven fouls. He didn’t score in 20 minutes, missing all four of his shots, in the loss to the Aztecs. He had 28 points in 47 minutes combined in his two previous games against Utah State and Colorado State going into the tournament. In six games combined this season against Boise State and San Diego State, Milling had just 11 points over 132 minutes, making just 4-of-23 shots.

The 6-8 Robinson played 17 minutes in the two games combined and missed the only shot he took. Robinson, though, is on the court for defense and to take up space in the paint but he also contributed just three rebounds.

Henry, Courseault and Huseinovic did not play in the victory over Boise State. Against San Diego State the three combined for 5-plus minutes. Huseinovic hit a 3-pointer in the first half against the Aztecs, playing all of two minutes and also committing a foul. Henry saw three minutes against San Diego State and had a rebound and a block and missed a shot while Courseault played the final 13 seconds.

Alford is the type of coach that lives and dies with his best scorers and, well, that’s what happened at the Thomas & Mack Center. Cambridge and Sherfield were on fire against Boise State, making 19-of-33 shots overall and 7-of-11 threes as well as 12-of-15 free throws. And the Pack jumped out to a 15-4 lead six minutes into the game and never trailed. The next night against San Diego State, though, Sherfield and Cambridge were a combined 10-of-30 and the Pack trailed for 35-plus minutes. Both games ended up as seven-point affairs but both felt like they were double-digit affairs. Washington should have been force-fed more than nine shots against San Diego State but Alford’s hands were tied against the Aztecs for the most part. Two of his starters (Cambridge and Sherfield) couldn’t make a shot against San Diego State and two other starters (Foster, Coleman) battled foul trouble the entire game and scored just four points in 50 minutes.

The Wolf Pack dominated Boise State right from the opening tip. The Pack was 18-of-32 from the floor and 9-of-13 on threes in the first half and really should have been up by more than just six (51-45) at the break. But the Pack also should have been down by much more than just five (37-32) at the half against San Diego State. Neither game was as close as the final score indicated. San Diego State’s defense simply suffocated Sherfield and Cambridge. “We wanted a body in front of Sherfield and Cambridge,” Aztecs’ coach Brian Dutcher said. “We wanted to let someone else beat us besides those two.” Washington did his best but he was just 6-of-9 from the floor against the Aztecs and had to watch Sherfield and Cambridge hoist 30 combined shots, missing 20. The Wolf Pack bench also never showed up in Las Vegas. The Pack subs were outscored 37-13 in the two games. The Wolf Pack starters, by comparison, outscored the Boise State and San Diego State starters. 146-122. And that was with Coleman and Foster contributing just 10 points in the two games over 112 minutes.