Nevada Traveler: Where it all began: Reno’s Riverside Hotel 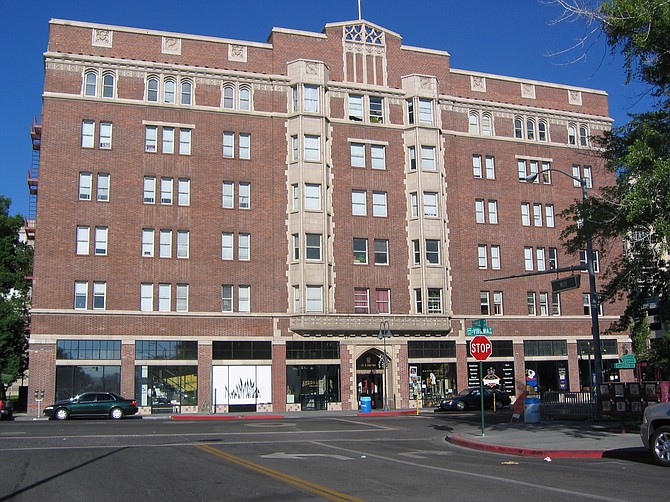 The Riverside Hotel sits on the site where the city of Reno began. Photo by Richard Moreno The Nevada Traveler

Much of Reno’s early history is intertwined with the city’s Riverside Hotel.

Still a majestic sight, the six-story brick structure with Gothic terra cotta decorations was built in 1926-27, then expanded in 1931 and again in 1950-51.

But the importance of the Riverside site goes back much farther. In 1859, Charles William Fuller set up a trading post and small inn on the land south of the Truckee River to cater to the prospectors and other folks heading to what became known as the Comstock Lode.

In 1861, a road was built from the Truckee Meadows to the Comstock and Fuller built a toll bridge adjacent to his trading post, which became known as Fuller’s Crossing. Later that year, he sold his holdings to Myron C. Lake, who renamed it Lake’s Crossing.

Between 1862 and 1868, Lake grew wealthy off his toll bridge, which had been granted a ten-year monopoly by the Nevada Territorial Legislature. In 1869, he erected on the site a more substantial inn, the three-story Lake House, which included a large barn and stables.

In 1868, Lake persuaded the Central Pacific Railroad, which was building the nation’s first transcontinental railroad, to establish a town on his land north of the Truckee River, which became the city of Reno.

Following Lake’s death in 1884, the Lake House became the property of Florence Thompson and her husband, William Thompson. Florence was the daughter of Jane Lake, Myron Lake’s first wife, and Myron Lake’s stepdaughter.

By the late 1880s, the Thompsons had renovated the Lake House and renamed it the Riverside Hotel. In 1896, they sold the hotel, which, by 1906 had become the property of its manager, Harry Gosse. Between 1901 and 1906, Gosse had overseen the construction of a new, castle-like Riverside Hotel, built around the older, wooden lodging house.

In 1924, the Riverside burned down and the site was acquired by George Wingfield, a Reno banker and political broker, who was considered one of the state’s richest individuals.

Recognizing Reno’s growing popularity as a place to obtain an easy divorce, Wingfield hired Nevada’s most well-known architect, Frederic J. DeLongchamps to design the current version of the Riverside Hotel to house divorce-seekers waiting to meet the state’s residency requirements in order to obtain their decree.

The original hotel boasted ground floor storefronts for businesses that would cater to those staying in the hotel (most are now bricked over). The hotel also had a casino (expanded in 1950) as well as a bank, beauty parlor and gourmet dining room.

Additionally, it included 40 corner suites with kitchen facilities and connecting rooms for children and servants, along with 60 single rooms for shorter stays. Each apartment was furnished with individual refrigerators.

After other jurisdictions loosened their divorce requirements and Reno began to lose its luster as the “Divorce Capital of the World,” the Riverside slid into a short of sleepy existence through the 1960s and 70s (Wingfield sold it in 1955).

In 1986, the hotel was no longer profitable and closed for good. After standing vacant for more than a decade, it was purchased in 1997 by the city of Reno, which partnered with the Sierra Arts Foundation and Artspace, a company specializing in renovating historic structures, and converted into artist lofts.

With the remodeling completed in 2000, the hotel offers 35 lofts with open floor plans that are rented to artists at modest prices. Additionally, it has a gallery where Riverside residents can exhibit their work and space leased to a popular local restaurant (Wild River Grille).

A good source of information about the Riverside is Jack Harpster’s book, “The Genesis of Reno: The History of the Riverside Hotel and the Virginia Street Bridge,” published in 2016 by the University of Nevada Press.