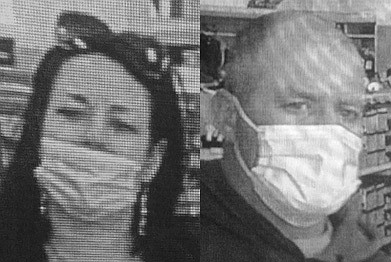 A woman is being sought in a shoe theft that occurred March 16 at Famous Footwear. She left the store with the man appearing in the photo on the right.

Douglas County authorities are hoping someone can identify a woman who stashed a pair of shoes in her shoulder bag at the Famous Footwear at the Carson Valley Plaza on March 16.

The woman was last seen wearing a blue long-sleeved shirt, denim short overalls, black sunglasses and carrying a large black bag. She had tattoos on her right calf, left ankle and left thigh.

The female left with a man, who was last seen wearing a wearing a green “Cat” hoodie and a light-colored shirt.

This is the second instance of shoplifting at the store in less than two weeks. On March 5 a woman was seen on video surveillance at Famous Footwear concealing several pairs of sandals in her purse and leaving the store without paying for the merchandise. She was last seen wearing a black vest, black pants, and a gray shirt. Her face is obscured due to her wearing a facemask.

Call Garren or the Secret Witness numbers with any information and refer to case No. 21SO06189.