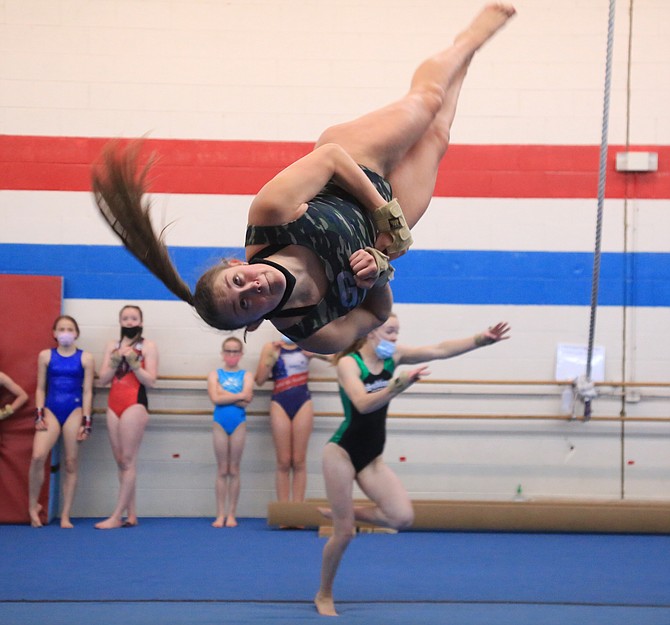 Silver State Gymnastics Academy in Carson City has made a name for itself over the years from its competitive meet results under the direction of owner David Lester.
In his 27 years of working in a gymnastics gym, he hasn’t experienced anything close to the challenges he’s seen over the last year-plus.
“People were afraid to come back,” said Lester, in reference to when Silver State first had to shut its doors due to COVID-19. “We followed every protocol. … We went from five days a week to two days a week and running two hours of classes.”
It was June when Lester and his assistant coaches, Cathy and Sam, were able to re-open to the two-days-a-week schedule when the academy was first back in operation.
Age ranges vary at Silver State, but what seems to be in agreement among the coaches and athletes, is the familial atmosphere inside the gym.
“It is definitely a family,” said Elle Liebendorfer, a Carson High sophomore. “I’ve been here for 14 years and he (Lester) is like my second dad.”
Family is always something coaches preach to athletes, but with the excessive degrees of difficulty, risk and commitment, the bonds inside a gymnastics gym run deep.

Finding the right way to operate
Lester has seen the lengths that ultra-competitive gyms go to try to reach success.
Seeing the all-or-nothing stakes required in other places was enough for Lester to originally decide to set up his operation differently.
The longtime owner started as a competitive truck driver and found his passion in pursuits of individual performance and achievement.
“I guess I’m a competitive person. I had a long career racing cars,” Lester said. “To me, it was like racing. How good do you want to be?”
It was just finding a optimal approach that suited him and those he was training.
His first years in the gymnastics world exposed him to sides of the sport he wasn’t interested in continuing.
“You could do really, really well and maybe do it a little differently,” Lester said. “I came from an elite background with kids on the national team, but it was ugly. We could still have really good gymnastics without it having to be so difficult.”
Now, he’s watched his athletes grow and his gym carry the recognition.
Trophies and awards line the walls upon entrance into the gym and a few gymnasts have spent over a decade working up to where they are now.

“The coaching here is really good,” said Liebendorfer. “It’s a lot more laid back here. We focus on having fun and getting things done. Not the train until you puke. We want you to be here.”

Liebendorfer, along with her best friend and teammate Eliana Hollar, said getting back into the gym was something they needed.

It wasn’t an easy transition back to the kind of athletic pursuits these gymnasts strive for.

After being forced out of the gym when the pandemic first hit, getting back into the routine took some work.

“I got back into it pretty quickly, but I did lose a lot of my strength and stuff in quarantine,” said Hollar. “I ended up injuring myself a little bit, but it wasn’t too hard to get back into it.”

With a layoff, both athletes admitted it was tough to get the necessary strength back for events like bars.

“It was hard to come back because (I) lost a lot of muscle and it takes so much longer to gain it than it does to lose it,” added Liebendorfer.
Rebuilding muscle, feel and those pesky calluses are all just a normal day for the high flyers.
Though Liebendorfer and Hollar won’t be competing this weekend, Silver State Gymnastics Academy has a number of competitors heading to regionals this weekend.
Much like their fellow high school athletes, they’ve battled through a shortened season with just two meets compared to usually six-plus.
“We try to compete as much as we can. At the higher level, it’s about who is the best competitor. You only get good at competing by competing,” Lester said.
Silver State Gymnastics Academy has ages young and old in the gym and Lester has seen so many athletes pass through his doors, he’s just glad he gets to continue fueling a passion of his.
“It’s been good for the city, if nothing else. In 27 years, I couldn’t even guess how many thousands of kids have come through here,” said Lester. “Everyone is here it is like a family. I’ve ben with two of these girls for 14 years. A few more for eight or nine years.”