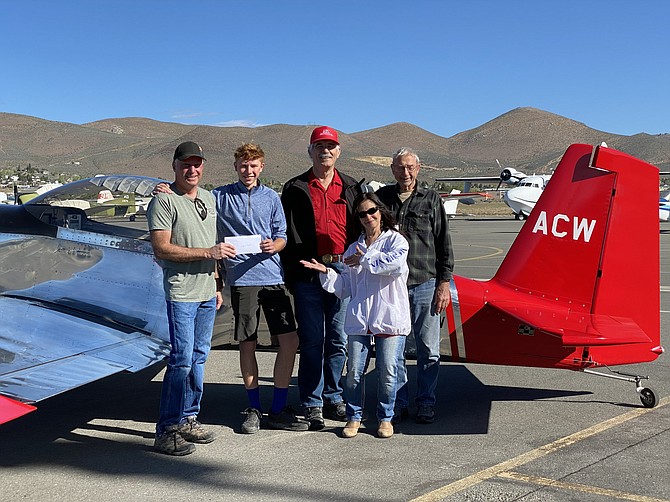 Carson High School sophomore Spenser Bray knew from an early age that he would be an engineer and aviator.

Bray spent hours and days in his garage experimenting with his fascination with design and flight. Through designing and flying gliders, then moving into RC design, Bray learned to understand the physics of flight as a remote pilot.

Bray joined the local High Sierra RC Club (HSRCC), which maintains the RC airport in Carson City; its members took Bray “under their wing” and provided him with resources, equipment, and guidance to better understand aerodynamics of an aircraft and how to pilot it.

When Bray was 12, he fulfilled a dream thanks to Carson City Airports local Experimental Aircraft Association, EAA403 Sierra Chapter, who operates the Young Eagles Program. Bray’s first flight was with a pilot who was formerly a NASA engineer and Navy pilot, George Clary, who became Bray’s inspiration. Clary took him in his Cessna Skymaster as his co-pilot and knew Bray was ready to take control of the Cessna through certain stages of flight.

Beyond the maiden flight, Bray had the opportunity to fly with other EAA403 seasoned aviators with thousands of hours of flight experience. Bray was hooked and joined the EAA403 family in 2019, volunteering his services to help with the Young Eagles Program.

Bray plays violin for CHS Chamber Orchestra, Carson City Symphony’s Strazz, is a sponsored mountain bike cyclist and rides on the Senator Cycling Team. He is employed at The Bike Smith on Carson Street.

Bray will enter the Jump Start college program at WNC as a CHS junior, then apply to the College of Engineering at University of Nevada, Reno after graduation. Once he completes his degree at UNR, he plans to join the Navy. His aviation career goal is to land a job as a commercial airline pilot. He said a job as a pilot for private industry aircraft is an option, but he wants to learn how to fly large passenger aircraft.