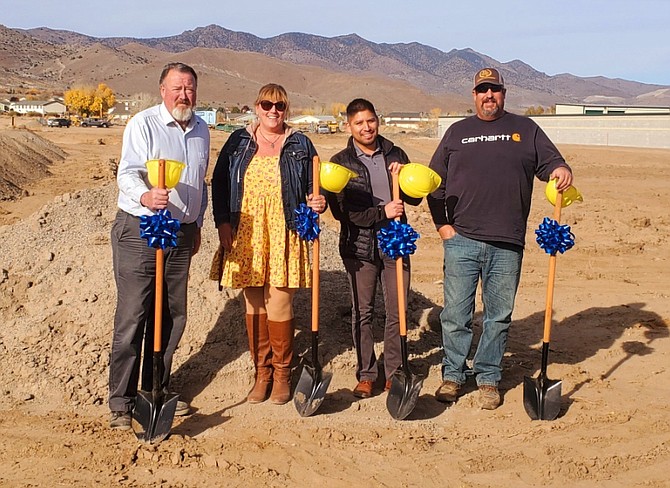 Service organization Chicanos Por La Causa has broken ground on the Dayton Gold Country Manor Apartments, a $14.1 million, 50-unit complex set on 2.89 acres on Retail Road dedicated to assisting low-income residents in Lyon County.
Members of the construction team Rolling Rock, LLC, Precision and Weststates Property Management along with Lyon County officials, the Dayton Chamber of Commerce, the Nevada Housing Division, PNC Bank and community members gathered Monday to hear about the new project that will offer future tenants five apartment buildings and a clubhouse with amenities including one- and two-bedroom units, smart energy, WiFi, a security system, a dog park, a playground, flower gardens and a washer and dryer. The complex will be Americans with Disabilities Act-compliant.
The grand opening is scheduled for early November 2022.
Receiving federal and state funds, the project is intended to help young families, including single parents or veterans with vouchers, at rent levels of 30, 50 and 60 percent, or above median average, according to Eddie Hult, Nevada director of development for CPLC.
Lyon County’s median household income level averages just below, Hult said, so theoretically the project is meant for residents on fixed incomes of about $18,000 or families earning approximately $30,000, with $36,000 considered high-end, Hult told the Appeal.
Dayton Chamber of Commerce president John Cassinelli, who attended the groundbreaking, told the Appeal he was excited to see another affordable housing project in the works.
“It’s good to see; it’s desperately needed in our area,” he said.
Cassinelli said the housing will help retirees as well as younger workers seeking employment among Dayton restaurant distribution companies expanding their workforce among the 20- to 40-year-old demographic that are challenged to recruit from outlying Northern Nevada counties or even within other Lyon’s communities.
“Gas prices are hardly an option for some, and rent is expensive with median rent about $1,300 to $1,500 a month generally in the area,” Cassinelli said. “In these parts, it’s going to be around $500 to $600 a month, which is more attainable for those folks.”
Calvary Baptist Church Pastor Austin White, who began serving in the area in 2019, said there’s a certain community appeal coming to the area that the Dayton Gold Country Manor project will burnish with its opportunities to help lower-income families, which includes a chance to serve all demographics and family members with grandparents with needs for social activities or health needs, such as brunch clubs, food pantries or COVID testing centers.
“Dayton has been growing for a long time, and one of the appeals of Dayton, if you will, is it will be cheaper for people to move to, but (the project’s) also going to help our community in that as our community grows, they’ll bring a lot of skills and mindsets that will help our community,” White said.
The rent for the Dayton Gold Country Manor Apartments includes utilities, Hult said, and the project will be managed on site.
Weststates Property Management’s waiting list will open on Jan. 1, 2022, but applicants who wish to have their names added to an early interest “soft” list can contact Missi Pollender at 775-246-3663. Group reminders will be sent to those on the list regarding prices, square footage, amenities, open house events and other details.
Applications can be printed online from www.weststatespropertymanagement.com. WSPM has offices in Carson City and Dayton in which offices can be e-mailed to melissa@weststates.org, faxed to 775-246-3664 or dropped off by appointment after Jan. 1.