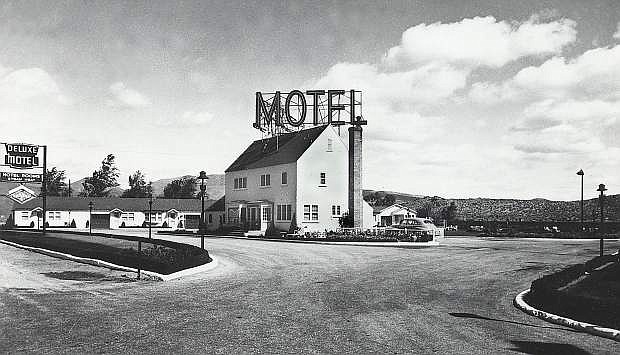 Wednesday
150 Years Ago
Women: Mrs. Laura DeForce Gordon and Mrs. A. D. Sargent will proceed to Washington this winter to visit Congress for the enfranchisement of women.
140 Years Ago
Advertisement: “Bishop Whitaker’s School for Girls, Reno, Nevada. The Sixth Year Will Commence August 25th, 1881. Tuition for Day Scholars in The Preparatory Department will be $4.00 per month. This includes instructions in Reading, Spelling, Grammar, Arithmetic, Geography, History of the United States, Penmanship and Free Hand Drawing. In Higher English the fee is $6.00 per month. In Music the charge will be $5 per month to pupils who do not practice at the School.”
120 Years Ago
They have a mine: Messrs. Cohn, Bryson and Lynch, two miles north of Carson, are developing a mine that will outclass the find of George Wedekind, now known as the Reno Star.
C. D. Bell told a reporter that all that was lacking was a systematic course of development work. There is a well-defined ledge that carries silver and gold besides other minerals such as copper.
100 Years Ago
Closed down the lid: Tonopah police have shut down the slot machines in that camp. No pay back is to be made, and all slot machines that deal in anything but bingles [sic] are to be confiscated.
70 Years Ago
“Jallopy”[sic] party: Mrs. L. W. Little introduced to her Carson friends an innovation in parties. When guests are called they are to go to the home of the hostess just as they were, without combing hair or putting on make-up.
20 Years Ago
Relocate fair: State Fair Board of Directors have voted to look for a new location outside Reno where the fair began in 1874. The group has its eye on Carson City. Board member Gary Derks of Washoe Valley said fair officials will continue to ask state officials for the use of the property at the state’s Stewart facility.
Thursday
150 Years Ago
To Widows: All widows will do well to go at once to the County Recorder and obtain a certificate of their widowhood, with which they should then proceed to the office of the Tax Collector and obtain their exemption under the law.
140 Years Ago
All sorts: Water pipes and hydrants were frozen up, giving to language that will never open the gates of paradise.
At seven o’clock in the morning the thermometer stood at zero—coldest morning of the season.
120 Years Ago
Tom Tennant: A former Carson boy, Tom Tennant, has spent the past five years in Elko. He states that activity in mining has been a big factor in their prosperity as well as cattle interests. Oil is the biggest thing. From the every hole punched in the earth, every indication of oil is found. “Just one spouter and we will have the people of the West flocking to us,” says Tom.
100 Years Ago
Company expands: The Balsamea Medicine company that originated in Carson City through the efforts of Dr. Krebs (Krebs-Peterson House in Carson City), is branching out and a large manufacturing plant is to be established in Cleveland, Ohio (a cure for Spanish influenza).
70 Years Ago
Classified ads: For rent—Three room apartment, electric refrigerator, $25. Two rooms and nook $22.50. Both have Flamo stoves, water and garbage paid. Garages included. Inquire of Mrs. Williams, Stewart Apartments, 110 Phillips.
20 Years Ago
Advertisement: “Wallace Theaters, $4.50 Bargain Matinees Daily—‘Shallow Hal,’ ‘The Heist,’ ‘Bandits,’ and ‘Domestic Disturbance.’”

Friday
150 Years Ago
Lake Bigler: Colonel A. W. Von Schmidt is at Tahoe City. He will personally be doing construction of the dam close to the edge of the outlet. The dam is being built of lumber close to the edge of the lake and is nearly completed.
140 Years Ago
Bodie mining men who are in this city believe that before the winter is over some rich developments will be made in the camp.
120 Years Ago
Short Liberty: One of the menagerie at the Emporium, a coyote, made a break for liberty. The coyotes managed to escape and all but one of them were captured. The one that escaped was killed, and Mr. Cohn feels the loss of the animal as it was a great attraction. He has a menagerie that is kept at the store. The latest addition to the Zoo is a crow that was caught near this city.
100 Years Ago
The Plumbers’ Harvest: Several plumbers in Carson City were swamped with telephone calls. The water system about the premises had frozen. The thermometer registered as 6 above zero—lowest point in two years.
70 Years Ago
Advertisement: “Carson Theatre—‘Topper Returns’ with Joan Blondell, Roland Young, Billie Burke, Eddie Rochester Anderson.”
20 Years Ago
Nevada’s Top One Hundred: Nevadas best and brightest gathered for a Saturday afternoon as Gov. Kenny Guinn announced the top one hundred Nevada high school seniors. Included among them were 14 students from Carson, Douglas, Storey, Lyon and Galena. Melanie Davis, Jennifer Greer, Joel Kiraly, Michelle Quilici, Nevada Griffin and Allison Kop all finished in the top 100 in this effort. The program is designed to keep Nevada’s academically gifted in Nevada.