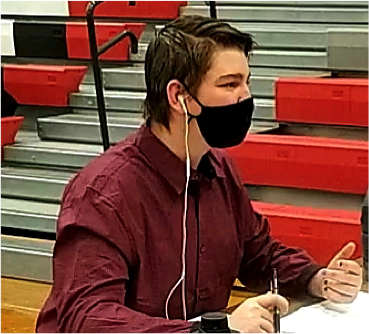 Pioneer High School’s speech and debate team has had a late but great start to the 2021-22 season.

COVID-19’s Delta variant not only knocked out the team’s coach for two weeks but has caused more strict regulations for tournament participation. PHS missed the first tournament as a result of these complications. In spite of all of the obstacles, freshman Connor Ragan was happy to attend the Wooster tournament Oct. 16.

Ragan competed in congressional debate, an event designed to run like a much quicker version of real congressional sessions. The students debate “legislation,” which has been written by their peers and act as “representatives” while debating topics ranging from COVID-19 vaccination doses to the safety concerns of trick-or-treating in the midst of the pandemic. Ragan spent time preparing questions and gathering statistics on both sides of the issue for every piece of legislation, and his hard work paid off.

In this event, students give speeches in favor of or in opposition to the submitted legislation, and then face a one-minute questioning period. Students are scored on a scale of 1 through 6 on presentation, argumentation, organization and logical use of evidence. Ragan gave three speeches and asked a lot of great questions, according to judge Jade Whitbeck.

Congressional Debate differs from other events in the way that students are ranked. In each of two sessions, the group has a different judge. Each judge picks two students who stand out as judge favorites. The scores of each student’s speeches in both rounds are averaged to give them an overall score. The top scorers and judges picks all end up in the running for placement in the event. These students’ names are given to the entire congressional chamber, and the students place them in order of who they think placed first, second, third, etc.

Ragan placed seventh in a group of 30 competitors, most of whom have far more experience. The students who placed first through sixth had all competed in some sort of debate event throughout the 2020-21 season.

When asked how his experience was, Ragan said, “The whole tournament was just a blast! I thought it was pretty interesting to see how other kids structure their debates and how they execute their speeches. It was great to just sit down and talk about my views with the other debaters, who were all very nice. I will definitely be competing in the next tournament, but this time, I'm going to place first instead of seventh!”

The next tournament will be Nov. 19 and 20, hosted by McQueen High School. If you are interested in volunteering to judge, contact Shufelt at 775-283-1317 or jshufelt@carson.k12.nv.us.