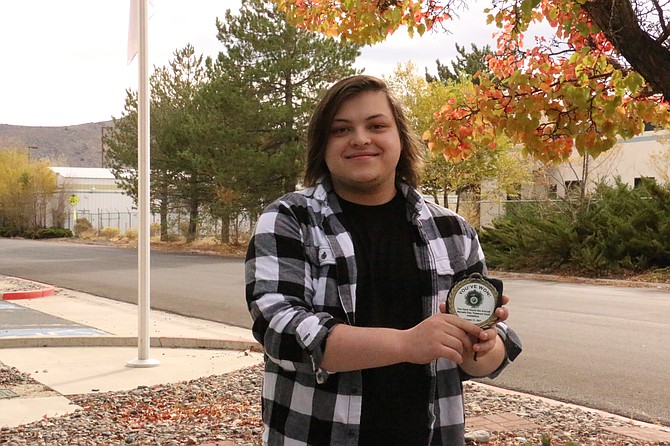 Evan Cherpeski, 20, found the medallion under a rock in Kahle Park near Stateline. He and his family, including his mother Jen, father Jeff, and siblings Ellen and Mason, started looking for the medallion on Friday after Jen saw the treasure hunt in her Facebook feed. (Photo: Faith Evans/Nevada Appeal)

In Kahle Park there is a statute of a young boy with the quote “There are two lasting gifts we can give our children. One is roots the other is wings.” This clue tells hunters the medallion is hidden at Kahle Park in Stateline, Nevada.

The Washoe or the "people from here as transliterated in older literature as Wa She Shu” live
near Lake Tahoe. They adapted to the presence of ranchers and miners, and managed to stay in their home territory rather than being sent to reservations. The Washoe have withstood the test of time and continue to be near or on their aboriginal lands. Today many inhabit small tribal acreage sites, known as colonies, having lost all most all of their ancestral lands. This clue tells hunters the medallion is hidden someplace the Washoe have called home.6

Fred Rogers was the first person to swim the length of Lake Tahoe, 22 miles, in 1955 and Erline Christopherson was the first woman to do so in 1962. This clue tells hunters the medallion is hidden near Lake Tahoe.

Both Mark Twain and Dan DeQuille wrote about the strong west winds that blow over Lake Tahoe and called them a “Washoe Zephyr,” after the Greek god of the west wind, Zephyrus. In fact, Zephyr Cove was named after the Washoe Zephyr. Mark Twain wrote of the Washoe Zephyr that “the reason there are so many bald people there is, that the wind blows the hair off their heads while they are looking skyward after their hats” and that it is responsible for the disappearance of “chickens, and parasols sailing in the remote heavens; blankets, tin signs, sage brush, and shingles a shade lower; door-mats and buffalo-robes lower still; shovels and coal- scuttles on the next grade; glass doors, cats, and little children on the next; disrupted lumber yards, light buggies, and wheelbarrows on the next; and down only thirty or forty feet above ground was a scurrying storm of emigrating roofs and vacant lots.” This clue tells hunters the medallion is hidden near Lake Tahoe.

The Washoe tribe has always referred to Cave Rock as the Lady of the Lake because the profile of a woman’ s face gazing out toward the lake is visible from the lake. The Forest Service’ s management plan is designed to “protect the Cave Rock heritage resource” and in doing so, rock climbing is now prohibited. While this ruling is a step in the right direction, the Washoe Tribe points out that the Forest Service’s decision is not based on tribal rights to practice their tradition, but rather on National Register historic status, and that the management plan still allows other activities such as hiking and picnicking that adversely impact traditional cultural uses of the area. This clue tells hunters the medallion is hidden near Lake Tahoe.

The goldfish is considered an invasive species in Lake Tahoe and some grow to a giant size. For many years American college students swallowed goldfish as part of a fraternity initiation process, which was first recorded in 1939 at Harvard.

Kingsbury Grade use to be known as SR 19. When it became SR 207 in 1978, the three miles connecting Kingsbury Grade to SR 88 through Mottsville Lane were considered part of Kingsbury Grade. However, five years later, in 1983, the three-mile section was removed from the route. This clue tells hunters the medallion is hidden near Kingsbury Grade in Lake Tahoe.

Clue #11
First toll master, then owner He shot old Brown
Was exonerated but had
To pay to put him down

Henry Van Sickle was the original toll master of the Kingsbury McDonald toll road. He also financed the road and eventually owned it before he sold it to Douglas County. Van Sickle and outlaw Sam Brown became enemies and Brown knocked on Van Sickle’s door and shot at him, attempting to kill him. Because Van Sickle was entertaining a large number of guests at the time and Brown was outnumbered, he ran. Van Sickle tracked him down and shot him in the chest, killing him instantly. He was exonerated with the court finding the “[d]eath by just dispensation of all-wise providence at his own expense.” The court, nevertheless, ordered Van Sickle to pay Brown’ s funeral expenses. This clue tells hunters the medallion is hidden near Kingsbury Grade.

Clue # 12
They discarded their belongings
On their way to Georgetown
But unlike the packers,
You can keep yours and win the crown

Kingsbury Grade was originally a trail that led to Georgetown, California. Salesman sold emigrants on the short-cut, but because the trail was narrow and not well-established, many had to discard their belongings at the trailhead. They became known as packers. This clue tells hunters the medallion is hidden near Kingsbury Grade.