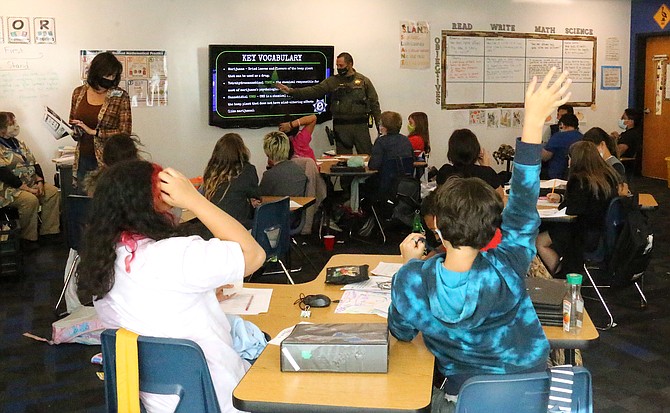 Student hands went up fervently Tuesday in one Fremont Elementary School classroom as Carson City Deputy Gage Mead asked how to recognize soda bottles labeled with harmful drugs they should be avoiding.
The Carson City Sheriff Office’s SWORN pilot program, taking place at Fremont before being introduced at other local elementary schools, has encouraged inquisitive fifth graders to interact with Principal Jennifer Ward-DeJoseph and school resource officers Mead and Sgt. Matt Smith.
So far, the adults are pleased by the learning outcomes being produced by the program.
“They’re asking good questions, personal questions,” Ward said of the students. “They’re asking about addiction, and that’s why we use the anonymous, ‘I know someone who does…’ statements.”
SWORN’s format offers a safe space for students to think on the risky behaviors and the dangers they pose, a chance to clear up misinformation they’ve heard on sensitive issues and an opportunity for the youth to hold discussions amongst each other and with their teachers and SROs. Modules were designed in 45-minute sessions covering peer pressure, tobacco and vaping, social media, prescription drugs, alcohol and marijuana to help students understand that engaging with these behaviors often leads to dangerous consequences.
“They’ve enjoyed it … and it’s more than just me being able to say these things,” she said of Mead teaching the information as a school resource officer in the classroom. “You always want to give kids a safe space to ask those pertinent questions and to have those discussions.”
The joint effort to help preadolescent students make healthier decisions by understanding these risky behaviors and their adverse consequences is considered an updated version of the Drug Abuse and Resistance Education series founded in 1983. DARE originally was adopted as a 17-lesson curriculum that eventually experienced its own evolution in format and challenges in instructional delivery, according to dare.org.
But issues such as vaping in 2019 had become problematic as DARE matured and the program began to focus more of its lessons to middle and high school students specifically on prevention in this area as a result.
In the Carson City School District recently, these issues of preadolescent vaping were not well addressed in the local DARE curriculum. Through the efforts of Mead and under the purview of Smith, the CCSO recently transformed the national program and made it more relevant to Carson City’s students.
The core values of the program, the “Pause, Think, Act” ideals that encourage students to process the consequences of their actions, are embodied through a logo and all the lessons are associated with Nevada health standards.
“The big things we’re trying to instill is, ‘Yes, some of these things are legal, but there is a difference between your developing adolescent brain and the brain of an adult who you may know,’ because the last thing we want is for them to go home and get upset at a parent or a guardian or an older friend every time they see them using something like this because they’re at different stages in life,” Mead said.
During Tuesday’s marijuana segment, Ward and Mead presented key terms, including tetrahydrocannabinol, or THC, and cannabidiol, or CBD, most commonly found in the resin of a plant, to help them understand its dangerous psychological effects. Mead explained students the importance of identifying trustworthy sources of snacks, such as crackers or cookies in unmarked containers or bags. He encouraged the students to be mindful of others, whether they’re adults or their own peers, providing them.
Ward said at the fifth grade level, students generally are not credited for knowing as much or more than they do. Likewise, she added, it’s been just as beneficial to see Mead become a mentor himself with the students since he’ll need to guide the other SROs how to teach the program themselves.
Smith said he enjoys seeing the students plugged in and understanding the resources available to them with each module that has been presented and to adapt the format as needed.
Last month, during a joint meeting of the CCSD Board of Trustees and Board of Supervisors, Mead and Smith provided a presentation about SWORN to the stakeholders and public, and the concept was well received.
During the pilot, Mead and Ward-DeJoseph are leading the lessons during science as part of the school’s health standard, but the intent is to have all the school resource officers visit the various elementary school classrooms and potentially the middle schools and high schools as it would be adapted, Mead said, once the officers have been provided with instructional practices.
“The goal to is have all the SROs designated to a school to teach this program,” Smith said. “It can be in person, in a lecture format or in an online format. … Next semester, it’ll be all SROs teaching the program.”
Mead said he hopes to build upon the program and adapt it to the needs of sixth and seventh graders and make simple revisions or updates as needed.
“You can’t just teach them for a couple of weeks and expect it to stick,” he said. “If we can keep refreshing it, there’s a higher probability of success.”
Results will be brought back at a later time to the Carson City school board before expanding the program to other local schools.