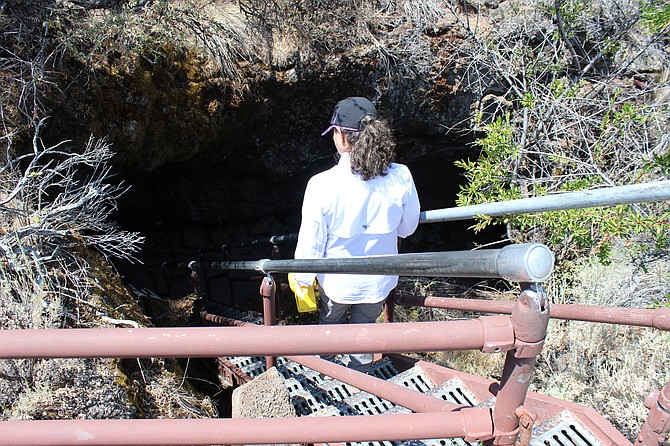 A visitor descends into one of the two dozen lava tubes or caves found at Lava Beds National Monument.

The 72-square-mile Lava Beds National Monument is a geologic marvel and a place filled with cultural treasures and a reminder of a tragic period in American history.

Set aside as a national monument in 1925, Lava Beds not only boasts the greatest concentration of lava caves or tubes in the continental United States (700 of them) but also prehistoric Native American petroglyphs (at Petroglyph Point) and pictographs (in Fern Cave) as well as lava fields that served as a refuge in the 1870s for members of the Modoc tribe trying to escape cultural extermination.

The lava tubes are what attract most visitors to the national monument. Nearly two dozen caves are marked and open to the public. They vary in length from 6,903 feet long to 148 feet.

The area’s geology is a result of it having been the focal point for major volcanic activity throughout the years. In fact, it is still considered a semi-active volcanic zone because several cinder cones in the region are less than a century old.

The monument sits on the northern slope of the Medicine Lake volcano, which last erupted 11,000 years ago. Volcanic rock, which formed from lava that flowed during eruptions 30,000 to 40,000 years ago, covers nearly the entire area and was responsible for creating the monument’s complex network of cinder cones, craters, chimneys and lava tubes.

The lava tubes were formed when streams of hot, flowing lava began to cool. The center of the stream would stay hot and continue to flow but the outside edge cooled and hardened. Once the hot lava drained away, it left behind a pipe-like cave.

Over time, multiple eruptions created stacks of caves on top of one another, creating multilevel underground passages. In some cases, the lava branched tree-like in various directions, creating smaller tunnels that sprouted from a central one, which is often known as the master tube.

Some of the caves at Lava Beds were used by Native people as campsites and as a source of water. During the first part of this century, JD Howard, a miller from Klamath Falls, Ore., began exploring and mapping the caves.

Howard spent more than 20 years wandering through the underground passages and provided most of the colorful names
for caves and cave features that are still used, such as Cleopatra’s Tomb, Hercules Leg and the Labyrinth. His interest helped spur the creation of the create the monument.

Signs lead to the many open caves scattered throughout the monument lands. The most accessible are clustered near the visitor center along a paved road known as Cave Loop.

Visitors can pick up a flashlight at the visitor center and purchase an inexpensive, plastic hardhat (recommended because some of the caves have low ceilings). Guided tours of selected caves are offered most days, although visitors can do plenty of exploring on their own.

The best place to begin a look at these underground passages is Mushpot Cave, located adjacent to the visitor center. This is the most developed cave with lighting (you use your flashlight in all the other caves), informative signage, and paved walking surfaces.

A short walk away is the entrance to the Labyrinth, which is the largest branch of the system, connecting to eight major caves spread over two miles.

A steep metal ladder draws you into the inky depths of the Labyrinth. At the bottom, there is a large chamber that leads in three directions, each of which entails some bending (to avoid low ceilings) or climbing (to get over rubble).
In almost any of the caves, you can wander for a time and begin to feel totally alone. Shut off the flashlight and listen — most of the time you won’t hear anyone else.

During one visit several years ago, I zigzagged through one cave for about 20 minutes before coming to a dead-end. I started back and realized that nothing looked familiar. I tried to retrace my steps but I wasn’t sure I was going the right way.
Despite the coolness below, I began to get nervous and perspire. I looked at my phone every few minutes. I took one branch but it led to another dead-end. I realized that I honestly didn’t know where I was or how to get out.

Finally, I heard voices. I followed the sound and spotted sunlight streaking through an opening in the ceiling. A couple came down the ladder. As they passed me in the tunnel, they asked if it was scary.

Embarrassed I had felt so panicky just a few moments earlier, I lied and said it was “a piece of cake.”

To reach Lava Beds National Monument travel north on U.S. 395, through Susanville to Alturas. Continue north on highways 299 and 139 (toward Tulelake). About 45 miles north of Alturas, follow the signs to the national monument. There is a fee for visiting the monument.

For information, go to www.nps.gov/labe/index.htm.

More about the monument’s tragic history next week.