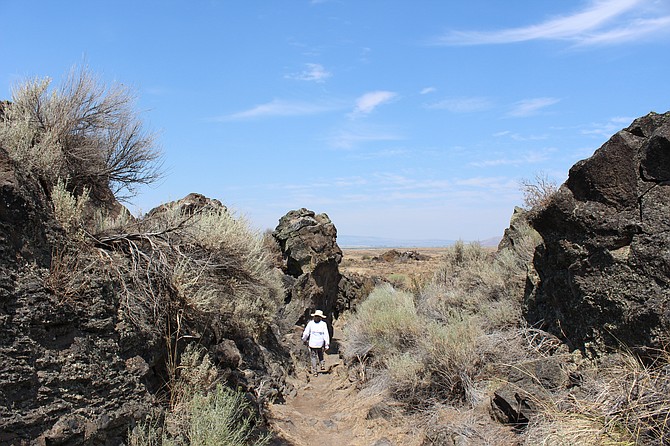 Trail leading through the lava rocks and formations at Captain Jack’s Stronghold, where members of the Modoc tribe avoided U.S. troops for nearly six months.

There is far more to Northern California’s Lava Beds National Monument than its remarkable geological formations and lava tubes. For example, it is the site of the Modoc War, the only Indian war in which a U.S. military general was killed.
The monument’s visitor center has an excellent series of displays detailing the circumstances leading to the war. Lava Beds Monument is located 270 miles north of Carson City via U.S. 395.
Archeological evidence, including petroglyphs, indicates Native Americans lived in the Lava Beds region for nearly 10,000 years. In more recent times, the Modoc people resided in domed dwellings scattered along the shores of Tule Lake and Lost River.
In the 1850s, white settlers entered the area and because they wanted to settle on land that was traditionally used by the Modocs, demanded that the Modocs be relocated to the Klamath Reservation with the Klamath and Snake Indians.
The Modocs and the other two tribes, however, were historic mortal enemies so attempts to force them to live together were doomed to fail.
One Modoc leader, Kientpoos, and a handful of his tribe refused to live at the Klamath reservation, which was in southern Oregon, and petitioned for their own reservation on the Lost River. Their presence along Lost River disturbed settlers, who pushed to have the Indians returned to the Klamath reservation.
Kientpoos agreed to return to the reservation but immediately faced harassment by the Klamaths. In April 1869, he again left the reservation, along with 371 members of his tribe, and returned to Lost River.
The situation worsened during the next few years and, in late 1872, troops were sent from Fort Klamath to forcibly return the Modocs to the reservation. The troops fought with the tribe and burned their village, but were unsuccessful in relocating them to the reservation.
In retaliation, one band of Modocs led by a man named Hooker Jim headed east of Tule Lake and killed 14 male settlers. Meanwhile, Kientpoos, who the settlers called “Captain Jack,” traveled to the lava beds area with the rest of the tribe.
Following the killings, Hooker Jim and his followers returned to the rest of the tribe. Kientpoos reluctantly allowed them to stay despite feeling that their murderous rampage might lead to retaliation against the entire tribe.
The area in which Kientpoos and the tribe settled was located in the rugged northern portion of Lava Beds Monument, just south of Tule Lake. The terrain is covered with sagebrush and encompasses deep lava trenches and small caves — which create the sense of being in a maze.
It was a perfect natural hideout for the Modocs and has become known as “Captain Jack’s Stronghold.”
In January 1873, about 300 troops marched on the Modocs, who numbered about 50 men and more than 100 women and children. The Modocs, however, were able to hold off the soldiers for the next five months.
Finally, President Ulysses S. Grant designated a peace commission to meet with the Modocs, who continued to insist on being granted their own reservation.
While Kientpoos favored negotiating a peaceful settlement, Hooker Jim (who had been indicted for murder and had no interest in peace) and other rival leaders jealous of Kientpoos’ authority led an effort to kill the peace commissioners. Since the Modocs made decisions by consensus, a majority of the members sided with Hooker Jim and voted to execute the peace commissioners.
On April 1873, two unarmed peace commissioners, which included Gen. ERS Canby, met with Kientpoos and several other Modocs. The Modocs again requested their own reservation but that proposal was rejected. In response, members of the tribe opened fire on Canby and the other commissioner, killing both.
Gen. William T. Sherman soon called for the “utter extermination” of the Modoc people.
The U.S. government sent a much larger army to bring the Modocs to justice. They marched into the area only to find tribal members had again escaped into the Lava Beds landscape.
In May, the Modocs launched a counter-attack on the troops, who were camped at Dry Lake, but were rebuffed by the better-organized and better-equipped army. The failed attack resulted in the disintegration of the tribe into smaller groups, with Hooker Jim leaving with about a dozen other men.
The Army quickly captured Hooker Jim, who agreed to track down Kientpoos in return for amnesty. On June 1, 1873, Kientpoos finally surrendered and the war came to an end.
Following a trial, Kientpoos and three other leaders were hanged. The remainder of the tribe was sent to a reservation in Oklahoma, where most soon died of various diseases.
Lava Beds Monument has several historic markers designating the sites of places related to the lengthy war.
In addition to Captain Jack’s Stronghold — where you can clearly see how the Modocs were able to hold off the army for months — there is Canby’s Cross, a large white cross with the inscription, “Gen. Canby U.S.A. was murdered here by the Modocs April 11, 1873.”
Visitors will find two self-guided trails leading through the rocky lava beds where Kientpoos and his people successfully avoided being captured by soldiers.
For more about the history of Captain Jack’s Stronghold, go to www.nps.gov/parkhistory/online_books/5views/5views1h11.htm.
To reach Lava Beds National Monument travel north on U.S. 395, through Susanville to Alturas. Continue north on highways 299 and 139 (toward Tulelake). About 45 miles north of Alturas, follow the signs. There is a fee for visiting the monument.
More on the cultural history of Lava Beds National Monument next week.