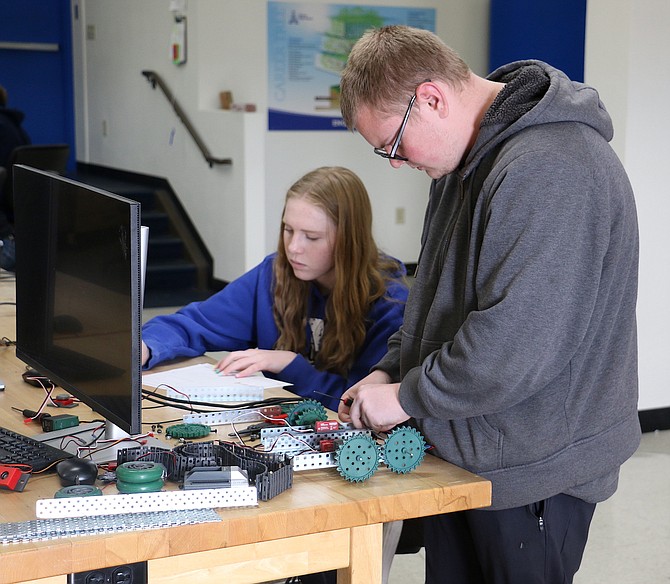 Carson High School freshman Elayna Quintero took an electric saw to carve her block of wood, added weight to the back and graphite to her wheels. Those extra few steps made her a champion after her first race.

Every slide down the track with a block racing car could make four block cars slow prematurely or force them to take a wild tumble into the classroom walls of the engineering room at CHS. Whatever the outcome, it’s both a challenge and a thoughtful experiment to make the next race more efficient for the cars with better materials, students learn quickly.

Belnap’s CTE students look forward to the principles of engineering instructor’s derby every year. The contest is a chance for them to put their computer-aided drafting and design skills to the test using the Autodesk software, power tools and the skills they learned from their math classes. Students with an interest in architectural drafting, manufacturing technology, welding or civil or electrical engineering can apply what they’ve learned in courses through some of the school’s pathways.

“It’s really simple when you tell kids, ‘You get to cut stuff and paint stuff,’ ” Belnap said. “It’s not a hard project to get kids excited about.”

Nevada is in the process of changing its CTE programs. Students typically go through a three-year program for certification, but Belnap said that is being reduced to two years because most of Nevada’s rural school districts are having difficulty finding enough teachers to fill CTE positions.

“It’s not like English teachers where they get like 20 of them graduating from (the University of Nevada, Reno) every year,” he said. “It’s a hard position to fill. If they find somebody in the rural school districts who can fill it, they can’t teach. They don’t have enough time to teach a three-year course. If they cut it down to two years, it benefits the rural school districts so they can offer more programs.”

In all, there are about 160 students in the program, with enough space in the school’s schedule to accommodate two sections for second-year engineering students, and Belnap said he is able to seat about 25 to 28 students per class, and most of those go on to third-year engineering.

Belnap said the school and other CTE programs in the state continue to receive immense support. Nevada recognizes only one curriculum for engineering and architecture through the company Project Lead the Way, a 501(c)3 nonprofit organization that offers pre-kindergarten to 12th grade pathways in computer science, engineering and biomedical science, selling STEM equipment and supplies to teachers and schools through its online store and generating revenue from fees for service and product sales. According to Forbes, as of 2017, the nonprofit had earned $73.2 million and had programs in 10,500 schools in all 50 states.

For teachers like Belnap, access to the requisite training from PLTW makes it easier to keep up on the changes when he’s asked potentially to teach civil engineering next year.

Belnap said the program – and the derby itself – ultimately is a chance for students to “play” as they learn what works or doesn’t. Amy Freismidl, the school’s vice principal for CTE, said watching the students collaborate is worthwhile as they learn to code, with students teaming up, drawing their designs on paper with their partners building their cars for the Pinewood Derby.

“Collin is great because he has this ‘I do, you do, we do’ approach to teaching, which is the foundation for project-based learning, and they can all speak to that,” she said. “It’s part of metacognition and teaching.”

The derby will continue to be a mainstay of the program, Belnap said.

But at the end of the day, Belnap takes pride that his cars still drive faster on the track than his students, and he uses it to help them improve theirs and to encourage them to go on to their second year or beyond where there are more challenges and more math to attempt if they’re prepared with their geometry, algebra 2 or precalculus as at least sophomores by then.