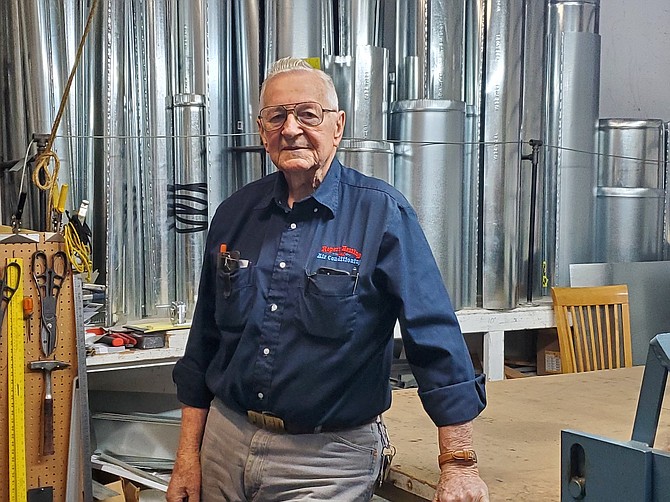 Fred Roper, the founder of Roper’s Heating and Air Conditioning, retired after 70 years in the HVAC industry.

My dad, Fred Roper, the original founder of Roper’s Heating and Air Conditioning, is celebrating his career, retiring after 70 years in the HVAC industry. His lengthy career has taken him from Washington to Nevada, where he settled in Carson City for the past 59 years.

My dad and my mom, Theda, founded Roper’s Heating and Air Conditioning in 1978, running the business on their own. He worked 60 hours in his first week and realized this company couldn’t be a one-man show. With Carson City at a population of 7,800, Roper got his HVAC license, hired three employees and never looked back.

Today, Carson City’s population has grown to more than 58,000. Roper’s Heating and Air Conditioning has served thousands of people and employed many, many individuals over the years.

My wife Autumn and I bought the company from my parents in 2012. We are proud that Roper’s has always been a family business serving the Carson City and greater northern Nevada community.

Looking back at a career

Dad began his career in 1952 right after he graduated from high school. He gained valuable experience working in maintenance for Wenatchee High School in Washington, primarily on high-pressure steam boilers in the school running on crude oils instead of diesel or gas, for about five years. He then went to work on the Columbia River in Washington for six months making metal for the automotive industry.

Since he was one of the only people experienced with oil furnaces at the company at the time, Dad seized an opportunity to build a service company when Desert Sheet Metal was sold to new owners.

At the time in 1978, Carson City was experiencing huge growth. Contractors would install oil furnaces in homes and move on to the next construction project. Dad knew that people would need service and repairs on their equipment, and the idea to form a service company became a reality.

Technician tales on the job

Dad always says he was never an office guy, and he preferred working in the field. He has quite a few stories to tell about the evolution of heating and air conditioning over the decades.

HVAC technician work doesn’t seem like a dangerous job, but when the fire department needs to be called on multiple occasions to ensure your project doesn’t blow up, you could say it can be hazardous.

One time at the Governor’s Mansion, the furnace under the house leaked oil all over the basement. Upon arriving to fix the problem, Dad immediately called the fire department, who stayed with him under the house with their hoses and fire extinguishers as they burned off the oil to get rid of it and used smoke injectors to clear the home of the smoke.

This used to be a frequent problem with the proliferation of oil furnaces, and my dad had many stories, including one time at a school, where smoke was coming out of the chimney for an hour and a half before the oil was cleared.

Another instance involved a raised game room and a boiler with an oil spill.

Dad said the firefighters shot pool to pass the time while making sure he and his crew didn’t catch fire on the job.

A fourth instance involved a boiler in a basement shooting visible flames out of the home’s chimney. Dad said he had to light one particular furnace years ago that was saturated with oil. “We had flames coming out the chimney and this thing was in the basement,” he said. “It kind of scared me a little bit.”

After years of service, demanding work, and dedication to the residents of Carson City and the greater Northern Nevada region, my dad is officially turning in his keys. He said he is excited to put his feet up and consider his job well done. Maybe.

Leaving the industry he loved for 70 years, and the company he founded, while raising his family and serving his community, is a big deal for my dad. We are grateful to this community for their business over the decades, and we look forward to continuing my dad’s legacy of integrity and excellent customer service.