Gone but not forgotten: Thank the Kelleys for the clock tower carillon 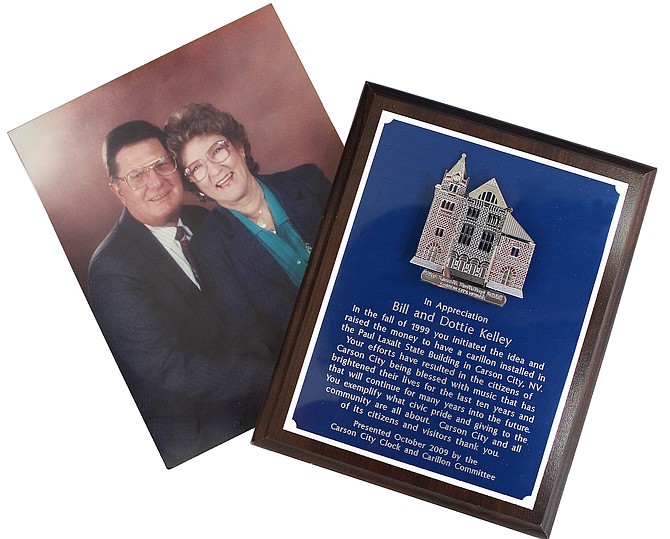 Bill and Dottie Kelley were responsible for the sounds you hear from Carson’s clock tower.

By Ronni Hannaman Special to the Nevada Appeal

One story begets another. As I continue to dig deep into the history of this incredible city and share them with readers, it always amazes me as to how much more there is to the story as is in the case of Bill and Dottie Kelley and then-Mayor Ray Masayko who were the impetus behind raising money to purchase the carillon today still chiming merrily away in the bell tower of the Paul Laxalt Building.

This information came to me via Konnie McGruder who was good friends of the now-deceased Kelleys and had read the recent Nevada Appeal article I wrote about the bell tower that did not mention the names of her friends. McGruder gave me some oral history and thought credit should be given where it is due even though the Kelleys would not be able to get the pat on the shoulder they deserved.

Part of the fun of learning any history is the research. I originally researched the fascinating history of what was Nevada’s first federal building and passed on the story you read in the Silver & Snowflakes insert published Nov. 26.

So, for the rest of the story: The Nevada Appeal published an article focusing only on the carillon on Dec. 20, 2001, citing the credit given to the Kelleys and Masayko for heading the group who raised $11,000 (now worth $20,000) to purchase the electronic chimes. At that time, Masayko gave full credit to the Kelleys “for fostering what is now called the clock chimes.”

Before Dottie Kelley passed, McGruder asked whether she could be the keeper of the appreciation plaque presented to the couple in October 2009 by the Carson City Clock and Carillon Committee which reads:

“In Appreciation to Bill and Dottie Kelley: In the fall of 1999 you initiated the idea and raised the money to have a carillon installed in the Paul Laxalt Building in Carson City. Your efforts have resulted in the citizens of Carson City being blessed with music that has brightened their lives for the last 10 years and that will continue for many years into the future. You exemplify what civic pride and giving to the community are all about. Carson City and all of its citizens and visitors thank you.”

McGruder wants to find a suitable location for the plaque within the Paul Laxalt Building which is now the Nevada Commission on Tourism and will be meeting with Kevin Hill who today manages the clock and the carillon.  Expect to hear the chimes even louder and clearer as the Kelleys smile from above.

And, thank Konnie McGruder for passing on this important oral history.