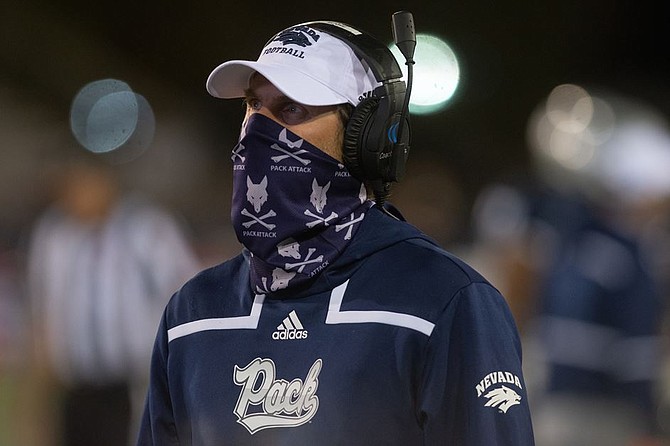 Ken Wilson and Jim Mastro are back together.
The Nevada Wolf Pack football program announced last week that Jim Mastro, who coached Wolf Pack running backs for 11 seasons (2000-10), is returning to the program as the Senior Director of Administration and Operations.
Mastro, who coached at Oregon (2018-21), Washington State (2012-17) and UCLA (2011) after leaving Nevada, is teaming up again with Nevada head coach Ken Wilson.
Wilson and Mastro have coached together at Nevada (2004-10), Washington State (2013-17) and Oregon (2019-21).
Mastro came to Nevada in 2000 from Idaho, where he coached under head coach Chris Tormey. Tormey was named the Wolf Pack head coach in 2000 and brought Mastro with him to Nevada.
Mastro, who helped former head coach Chris Ault develop the pistol offense after the 2004 season, coached outstanding Wolf Pack running backs such as Chance Kretschmer, Matt Milton, Robert Hubbard, Brandon Fragger, B.J. Mitchell, Luke Lippincott and Vai Taua. Taua is now the Wolf Pack’s assistant head coach.
“My success on the field was mainly because of this man,” Taua wrote on Twitter, referring to Mastro. “Blessed to work with him and continue learning from one of the best minds in the business.”

MUMME PRAISES CARSON STRONG: Former Wolf Pack quarterbacks coach Matt Mumme told the Colorado State media recently about Nevada quarterback Carson Strong.
“Carson was such a special kid,” said Mumme of the Wolf Pack quarterback from 2019-21 that will play in the Feb. 5 Senior Bowl in Mobile, Ala. “Nobody (college scouts) wanted him. He was the misfit.”
Mumme, who left the Pack to coach the Colorado State quarterbacks in December, helped turn Strong into one of the greatest quarterbacks in Nevada history.
Strong, who is expected to be an early-round pick in April’s NFL draft, set Nevada single-season records this year for completions (366), attempts (523) and touchdowns (36). His 4,175 yards this season are second in school history for one season.
Strong likely would have set every Pack career passing record if he would have played his final two seasons of eligibility. But he will leave Nevada with the fourth most career yards (9,368), third most touchdowns (74), second most completions (852) and fourth most attempts (1,252).
Strong played just 31 games over three seasons and had 17 games with 300 or more passing yards and 14 games with three or more touchdown passes.
“Everybody was like, ‘Well, what does he fit,’” said Mumme when discussing Strong’s recruiting after the 2017 season. “‘He can’t run out of sight in two days. Who’s he going to be?’”
Mumme said he saw Strong’s potential for greatness the moment Strong stepped on campus in the spring of 2018.
“Number one was his passion and heart for the game,” Mumme said. “You had to kick the kid out of the (coach’s) office. He wanted to learn.”

MUMME EXPLAINS RAMS’ TAKING WOLF PACK RECRUITS: When Jay Norvell became the Colorado State head coach in December and took the majority of his Nevada offensive staff with him, he also took most of the high school and junior college players he was recruiting for Nevada at the time.
Mumme, of course, said not to blame Norvell.
“Coach Norvell tells us to go recruit the best guys for our system,” Mumme said. “So we go out and build those relationships with these young men. To sit there and say they are necessarily honed into the colors of the school or what the school is, they are really more attracted to the coach. It was natural for them to quickly say, ‘This (going to Colorado State) is what we want to do.’ It wasn’t a deal where we coerced anybody. They wanted to follow the offense (the Air Raid).”
One of the veteran Wolf Pack players Mumme and Norvell took to Colorado State was quarterback Clay Millen. Millen threw just two passes for the Pack last year but likely would have been the Pack starter in 2022 had Norvell and Mumme stayed in Nevada. Millen now looks like he will start for Colorado State in 2022.
“Clay knows what I expect,” Mumme said. “But Clay knows he’s not going to be given the job. Clay has the upper hand now but we’re going to mix up the reps and come out with the best guy.
“It’s different from when we went to Nevada (for the 2017 season). We had to start over from scratch then. Here, we got some guys (like Millen) who can come in.”

CHANG LEAVES NORVELL FOR HAWAII: Another Pack assistant coach that Norvell took to Colorado State was wide receivers coach Timmy Chang. Chang, though, left Colorado State this past Saturday to become the head coach at Hawaii.
Chang set NCAA career passing records of 17,072 yards and 1,388 completions as Hawaii’s quarterback from 2000-04. He coached under Norvell at Nevada from 2017-21.
“Hawaii hit a home run by bringing Timmy Chang back to the islands,” Norvell wrote on Twitter this week. “Timmy is a high-level football coach, a tireless recruiter and loves the state of Hawaii and his alma mater. It’s been tremendous to have him on our staff the last five years.”
Chang was offered the Hawaii job the day after former Hawaii coach June Jones turned it down. Jones has since said he wanted the job but felt disrespected by Hawaii’s offer of just a two-year contract. Hawaii then offered Chang, who played for Jones at Hawaii and also coached under him at SMU, a four-year-deal the next day.
The hiring of Chang, who replaced Todd Graham, was met with nearly unanimous approval by Hawaii’s supporters, players and alumni.
“I know I would have gotten it turned around but now Timmy gets the chance to do it,” Jones said. “Rooting for him. Hopefully he’s going to win and do great things. He is one of the great kids I coached at the university and I have a lot of aloha for him and he has a lot for me.”
Marcus Mariota, who was born and raised in Honolulu and went on to win a Heisman Trophy in 2014 for Oregon, also congratulated Chang. Chang and Mariota, now a Las Vegas Raiders quarterback, are both Saint Louis School (a Honolulu high school) graduates.
“Timmy is truly one of the first quarterback icons from the Saint Louis School and someone I looked up to growing up,” said Mariota on Twitter. “It’s awesome to see someone from home take over the program.”
The 40-year-old Chang is the second former Wolf Pack assistant and former Hawaii quarterback to take over the Rainbow Warriors program. Nick Rolovich, a former teammate of Chang’s at Hawaii, was a Wolf Pack assistant from 2012-15 and was the head coach at Hawaii from 2016-19. Rolovich left Hawaii to take over the Washington State program in 2020 but was dismissed this past season after choosing to not get a COVID-19 vaccine.
Chang coached tight ends and wide receivers at Nevada and is a former offensive coordinator at Jackson State and Emory & Henry.
“I’m back,” said Chang after accepting the Hawaii job. “I’m home. In my heart I’ve never left.”

ROGERS WANTS OUT OF UNLV: UNLV Rebels quarterback Justin Rogers put his name into the transfer portal on Monday.
Rogers, who played one season at TCU (2018) before joining the Rebels the past two years, was once one of the most highly recruited quarterbacks in the nation.
Rogers, though, was just 48-of-82 for 637 yards and four touchdowns in two seasons at UNLV, competing with Doug Brumfield, Tate Martell and Cameron Friel for playing time. Also likely factoring into Rogers’ decision to enter the transfer portal was UNLV’s signing of former Tennessee quarterback Harrison Bailey recently.
The 6-foot-5 Bailey was 51-of-75 for Tennessee in 2020 and 2021 combined for 594 yards, four touchdowns and two interceptions. He has four years of eligibility remaining.