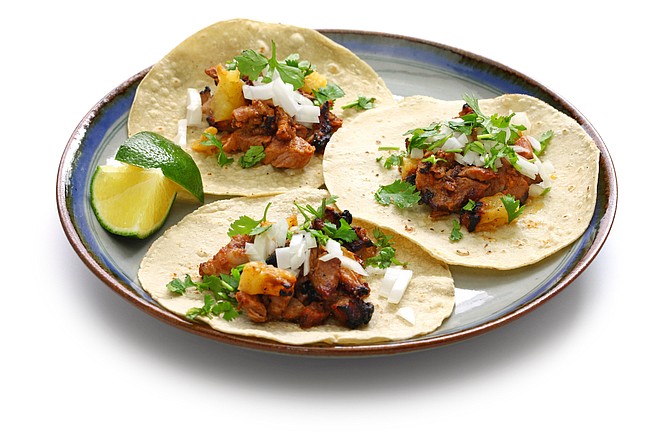 One of my all-time favorite street foods in Mexico is tacos al pastor. These succulent, marinated and slow-roasted tacos are found throughout many cities in Mexico.

Look for a crowd of people around a street stall patiently waiting for their taco to be carved off the vertical spit called a trompo. The taqueros carve the meat with their huge, curved cleaver, thinly slicing the charred pork from the trompo, and adding a bit of the pineapple that sits on top roasting slowly with the pork. As they slice the pork, I always ask for a bit of extra pineapple. Sometimes they accommodate this request, albeit usually reluctantly.

The tacos are on double corn tortillas, topped with raw chopped onion, cilantro and your choice of several sauces. As you take your first bite, you realize why there is a crowd and wonder why you ordered only two of these delicious tacos which are the perfect marriage of crispy, slightly spicy and sweet pork.

The history of tacos al pastor begins in Puebla, Mexico, when Lebanese immigrants escaped to Mexico from the Ottoman Empire in the early 1900s. As they settled and opened restaurants, they brought with them lamb shawarma roasted on a vertical spit they developed in the 14th century. These became known as tacos arabes. During the 1950s and 1960s, Mexico started to borrow the vertical spit with pork marinated in chiles and Mexican spices and created al pastor. No one seems to know where the roasted pineapple atop the trompo originated, it remains a culinary mystery. I have wanted a trompo for many years to make al pastor and shawarma, but due to spatial constraints in the kitchen there is no way to make it work. Instead, I found a way to make al pastor with a slow-roasted oven method that recreates the self-basting spit cooking technique.

Blend until smooth. Put three-quarters of the marinade into a bowl then marinate each slice of Pork Butt/Shoulder and layer into a loaf pan and pushing the meat into the sides and corners tightly.

I used a 1/3 hotel pan 13 x 7 x 4 deep for 6 pounds of meat. Any size loaf pan will work. Make sure to leave an inch space at the top of the loaf pan. Wrap with aluminum foil and bake at 275 degrees for 4 hours, or until 190 degrees internal temp.

Remove from oven and uncover to allow cooking.

After the loaf cools to below 135 degrees internal temperature, then put in the refrigerator overnight. Remove the pork from the pan while retaining all the rendered fat and gelatinous stock.

Add ¼ cup lime juice and the remaining marinade. Set aside for reheating the al pastor.

Slice the al pastor loaf ¼-inch thick and heat a skillet, preferably cast iron, to med-high heat. Add a cup or two of the pork. Do not overcrowd the meat.

Stir once or twice in the first few minutes. You really want the pork to crisp a bit. Add several tablespoons of the well stirred rendered stock and marinade then reduce and remove from pan. Repeat with the remaining pork in several small batches.

Pineapple Salsa
1 small pineapple peeled and cut into quarters, roast for 10-15 minutes at 350 degrees
Cool and dice about ¼-inch to 3/8-inch
Add a small yellow or white onion, small batch cilantro, chopped rough
2 serrano chiles without seeds. You can use more or leave the seeds in for more heat
and ¼ cup lime juice
sprinkle of salt