Tigers one win away from Class 5A title 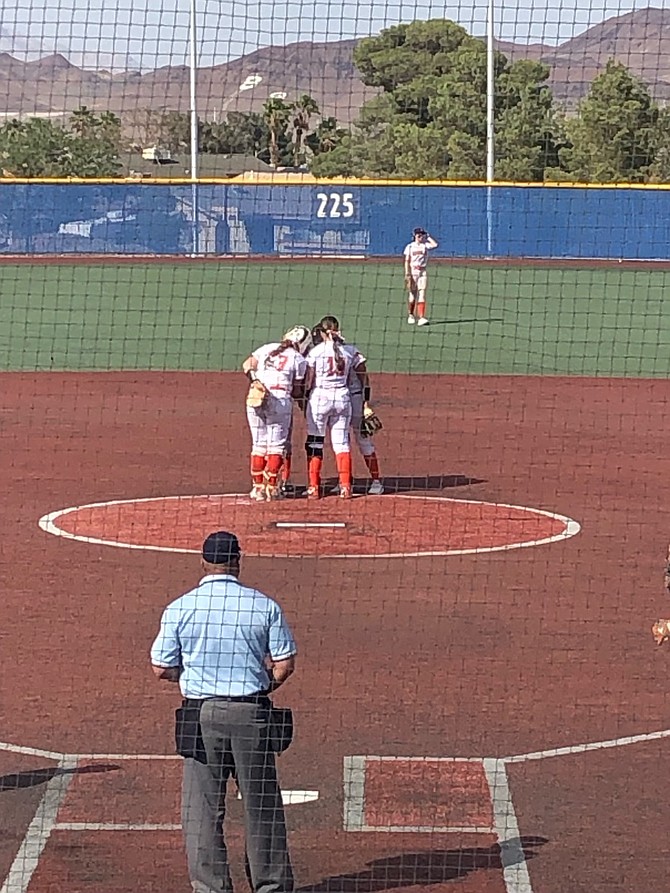 The Douglas High infield gathers in the circle Thursday against Green Valley. The Tigers will take on the Gators again Saturday for the Class 5A state title
Courtesy

The Douglas High softball team is one win away from capturing a Class 5A state title after besting Spanish Springs in the state semifinals, 4-1, Friday afternoon.
It was the sixth meeting between the Tigers and Cougars this season with Douglas having won the final four.
In doing so, the Tigers get a rematch from their first round game against Green Valley Saturday at 10 a.m. in the championship.
After Douglas defeated Spanish Springs, the Cougars fell 2-1 to the Gators to put Green Valley into the state finals.
However, the Gators will need to beat the Tigers twice in order to win the state title due to the double elimination format of the tournament.
“They have good pitching and swing the bats well,” said Douglas head coach John Glover. “It’s going to be a dog fight and that’s what we’re expecting.”

Defeating the Cougars
Spanish Springs jumped on Douglas quickly with a run in the top of the first inning on a Kennedy Dudley RBI double.
In the third, Talia Tretton tied the contest up with an RBI double of her own.
After Ryleigh Blaire was hit by a pitch, Zora Simpson uncorked a line drive double to center field, scoring two.
In the fifth, Blaire doubled in Annie Hill, who was courtesy running for Tretton, to give Douglas a 4-1 lead and another insurance run.
“We got some timely hits today in some big spots,” said Glover.
Simpson, after missing the first 22 games of the season with a knee injury, has  the go-ahead hits in the regional final and Friday in the state semis.
“It’s a great story,” said Glover. “We knew she was a great player. She’s hitting her mid-season stride. She’s coming up with some big hits and playing some great defense.”
Simpson is 4-for-6 with three RBIs and a double in Douglas' two state tournament games.
Tretton struck out seven batters in the win and allowed four hits and a lone earned run.
Though the Tigers committed a pair of errors in the field, their head coach still had praise for the Douglas defense.
“Eva McNinch had some really solid plays and Emma Glover had a diving catch to end the game,” said Glover.

First round rematch
Douglas opened the state tournament with a 5-1 win over Green Valley Thursday at the College of Southern Nevada.
After playing at Bishop Gorman High Friday, Douglas will be back at CSN for the championship.
The Tigers tallied nine hits and drew a walk last time they faced the Gators.
Simpson went 3-for-3 with an RBI while Maddie Gooch and Ava Delaney each tallied a pair of hits.
Delaney and Gooch both had RBI triples in the win and the quality at-bats from the bottom of the lineup carried Douglas to an opening round win.
On the opposite side, the Tigers posted a 1.000 fielding percentage and Tretton gave up five hits without allowing a walk Thursday.