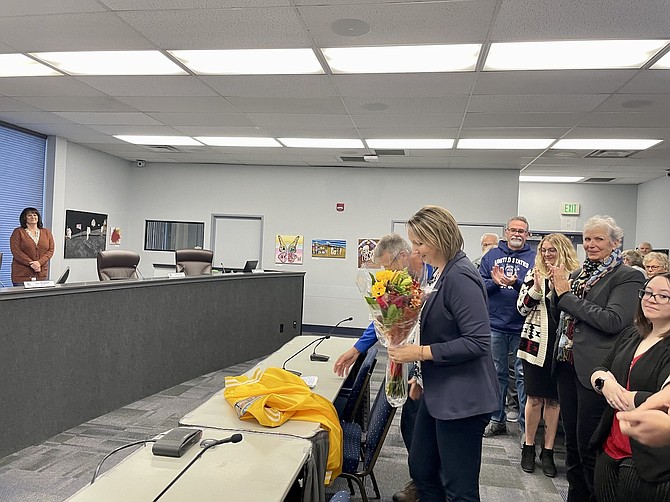 Carson City Clerk-Recorder Aubrey Rowlatt received flowers and a standing ovation Friday while presenting general election results for certification to the Board of Supervisors.
Photo by Scott Neuffer.

Friday, the Carson City Board of Supervisors unanimously certified the results of the Nov. 8 general election.

Three mail ballots were rejected by the mail ballot processing and counting board, Rowlatt reported. One mail ballot envelope did not contain a ballot, and one in-person voter received voting credit but did not place the ballot into the polling location tabulator.

None of the five discrepancies would have altered any race in the election, Rowlatt found.

Additionally, Rowlatt said 205 mail ballots needed a signature cure – with 115 successfully cured – and 1,687 mail ballots came back undeliverable. The latter total is down from nearly 3,900 during the primary, a result of ongoing maintenance of voter rolls, Rowlatt said.

“I understand the frustration of delayed results, but we are following current Nevada law,” she said.

Rowlatt thanked staff and volunteers for their hard work as well as city managers for pitching in when a snowstorm hit on Election Day.

“They truly do go above and beyond,” she said.

Rowlatt, who is retiring from the nonpartisan position, received flowers and a standing ovation.

“Aubrey, you gave us the opportunity to effectively be part of something bigger than ourselves, something no one can ever doubt the legitimacy of, and something that contributes to the survivability of our democratic republic,” said Tod Jennings, a volunteer who worked with Rowlatt for two elections.

Supervisors also thanked Rowlatt. Among those at the canvass Friday was incumbent Ward 1 Supervisor Stacey Giomi, who won reelection with nearly 57 percent of the vote, 12,272 votes compared to 9,281 votes garnered by challenger Wade Bradshaw.

“I am very humbled,” Giomi told the Appeal in a previous interview. “Anytime you go through the election process, it’s a humbling experience. I’m grateful for the people in the community.”

Wednesday, Bradshaw released his own statement, conceding the race and congratulating Giomi.

“I want to thank all of those that donated to my campaign,” he said. “I also want to thank everyone that volunteered and helped me with precinct walking here in my hometown of Carson City. The support I received was truly humbling.”

For District 1 of the Carson City School Board, incumbent trustee Maria Lupe Ramirez kept her seat with 11,393 votes compared to 10,242 votes received by candidate Jason Stinson.

In what was the tightest race in the city, that to replace Rowlatt as clerk-recorder, William Scott Hoen beat Stacie Wilke-McCulloch by 206 votes: 10,902 to 10,696.

“To all the candidates, successful or not, thank you for running,” said Mayor Lori Bagwell.