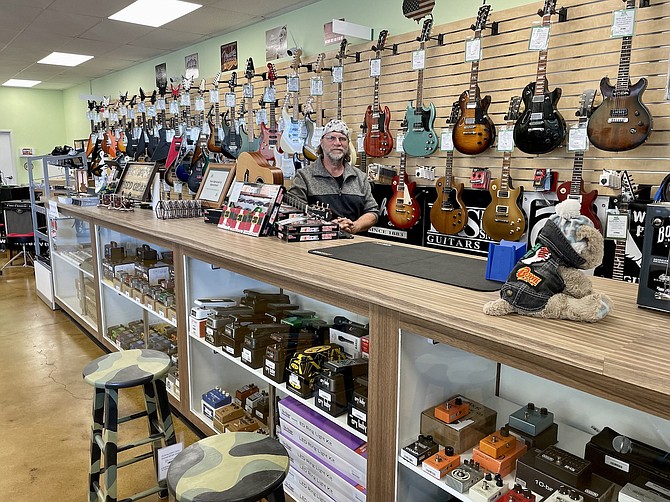 Curt Dony in front of his guitar selection at C.C. Top Music, Arts, and Beyond on Nov. 15. He sells new and used vintage guitars.
Photo by Scott Neuffer.

Going into the holiday season, shoppers have a new store in north Carson City offering an eclectic mix of music and art supplies.

The store also has children’s accessories as well as a “pet boutique” area. The latter is fitting since the store allows customers to bring in their dogs, on a leash.

Although he is the owner, Dony’s wife, Helen Mangold, collaborates both as an arts instructor and artisan featured in the shop. The new shop routinely holds classes and events. From noon to 2:30 p.m. on Dec. 3, for example, Dony is dressing up as Santa for free pictures with customers and their dogs.

Also, holiday hours for the store begin the day after Thanksgiving.

The couple hails from the Chicago area. Mangold is a teacher, and Dony has a background as a logistics executive. They moved to Nevada to retire because, like many, they were attracted to the distinct four seasons of Northern Nevada.

After half a year into retirement, however, Dony “started to get a little itchy.”

“This is a dream,” he said of the store. “It’s always been a dream ever since I was a kid.”

Dony started playing saxophone at age 9. He also plays guitar and bass guitar as well as drums. He recalled going to Guitar Center when he was younger and loving “the vibe.” As an adult, he spent a few years working with the company.

“I want to replicate that same feel and go above and beyond that,” he said.

He said C.C. Top’s Oct. 14 soft opening was “an emotional experience beyond all belief for me.”

“I’ve always had music running in my blood,” he said.

Dony has been reaching out to other local music businesses, including Play Your Own Music, a Carson-based music store that offers instruction.

“Why not work together?” he said.

At his store, Dony wants to create a fun and safe place even if people just want to hang out.

“The guitars are ready to play right off the wall,” he said. “I don’t want someone to pick up a guitar and only get half the experience before deciding to depart with their hard-earned money.”

Creating the right atmosphere is important, Dony said, but so is a “flexible” business plan that includes a mix of interests.

“One thing I do here, I do deals,” he said. “I want to put something together for them (customers) that makes sense.”