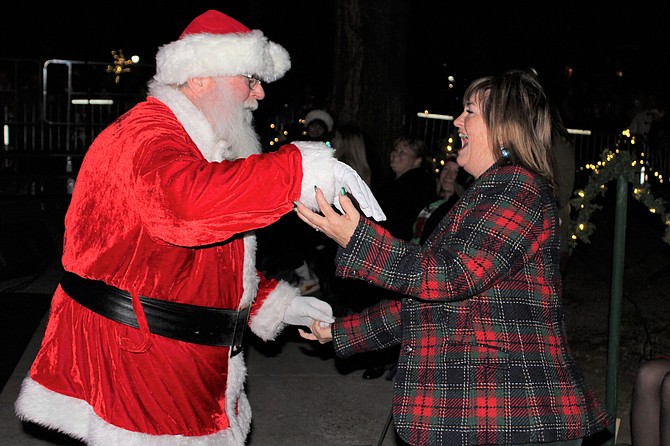 It’s beginning to look a lot like Christmas and soon giant snowflakes will be lighting the way through central downtown guiding everyone – even Santa – to enjoy the beloved annual hometown holiday event to kick off the countdown to Christmas and the New Year.

Silver and Snowflake Festival of Lights will take place on Friday, Dec. 2, at 5:30 p.m. as the city’s delightful fifth graders once again gather on the steps of the state Capitol to sing favorite Christmas Carols.

How did this tradition begin?

The first tree lighting on the Capitol grounds began 108 years ago on Christmas Eve 1914 when one Colorado Blue Spruce, still standing today, was chosen as the official state Christmas Tree to be adorned with electric lights.

The Governor was Republican Tasker L. Oddie who, as one of his last official tasks approved of and lit the tree before turning over the office to Democrat Emmet D. Boyle on Jan. 4, 1915.

The original idea of conducting a tree lighting ceremony featuring caroling and the appearance of Santa Claus is attributed to Carson City’s Leisure Hour Club. Longtime member Dan Neverett writes, “The State Christmas tree was planted in 1876 by George Washington Gale Ferris, Sr. as part of a Legislative effort to improve the Capitol grounds. The members of the Leisure Hour Club first dreamed up the idea of decorating the evergreen tree to celebrate Christmas in 1914. The members solicited funds to purchase decorations for the tree and gifts for local children.” By then, this special tree had already been digging in its roots for 38 years.

The tree lighting went uninterrupted until 1973 when Gov. Mike O’Callaghan declared due to the energy crisis, the tree and the grounds were to “remain dark as midnight.” And, dark it remained for 15 years until 1988 when those who remembered the joy of past events took matters in their own hands by once again going to local businesses and service clubs to support the effort to relight the downtown for the holidays.

The driving force behind the reinstatement of the tradition was Marilyn Lewis (then Paoli) who tirelessly worked to solicit the support of the business community writing, “Christmas is coming to Carson City … and you can help!” And help they did.

It was in 1990 the school district became involved in the lighting ceremony when 43 members of the Grace Bordewich Elementary School Choir sang on the Capitol steps. Gov. Bob Miller and his family presided over the tree lighting and a new phase of the lighting ceremony was born. By 1991, the children’s choir had grown to 150 and today, over 500 fifth graders from all Carson City elementary schools entertain the community on this special night. As the Grinch continues to declare, "Blast this Christmas music. It’s joyful and triumphant."

In 1989, the nonprofit Carson City Mainstreet was organized by the who’s who in the city then. The Mainstreet marketing committee took over the event and hired the Arlington Group, run by Maxine and Fred Nietz, to grow and manage the festival. Later, the city provided permanent funding. In 2014 the Chamber again became involved.

It is, however, the children and their music teachers who make this event so special. There are many friends and relatives in the audience who can’t contain their pride.

Mark Twain Elementary music educator Christina Bourne has been teaching Christmas carols to kids since 2003 and became official music coordinator in 2016. Teachers begin teaching carols in September since they have the music kids for 45-minutes once weekly. “This event has been a magical moment for my students,” writes Bourne. Though the Chamber coordinators pray for a beautiful clear starry night, Bourne prefers a bit of snow, “My favorite years have been when we have snow fall while we are singing, for this adds to the ambiance of the celebration.”

Stacy Woodbury writes, “My twins, Chloe and Peter, were fortunate to be a part of Silver and Snowflakes in 2018. The event was something they looked forward to during their grade school years, much like a rite of passage to middle school being able to assemble with their peers citywide and kickoff the holiday season for the Carson City community.”

As may be echoed by many parents watching their fifth graders sing, she added, “It was bittersweet to watch them with pride, knowing they were growing up and ready to move on to the next stage of their life but still giddy children looking forward to the magic of the holiday season.”

The original tree was retired in 2021 because somehow a conduit was imbedded within the trunk in the early 1970s during a major retrofit of the Capitol building and is causing the tree to slowly die. The younger, sturdier tree took over the spotlight last year. Today, almost all the trees are lit with thousands of bulbs and the excitement of seeing the state tree lit first has not diminished.

What started off in 1914 as just a simple tree lighting attended by almost the whole town – then estimated at 1,500 – is as anticipated today as it was then. The kickoff of the holiday season is held the first Friday in December and the snowflakes and Capitol trees shine brightly until the first week of the New Year.

The genesis of the event must be credited to the state of Nevada.

Even today, the state takes pride in decorating the grounds assigning dedicated staff to create a magical holiday forest braving all elements to do so. Even during the COVID crisis, the trees were lit. The festival has grown through the financial support of the Carson City Redevelopment Authority allowing the festival to grow and add other elements.

Other communities in Nevada cannot even come close to replicating this event, for there is only one state Capitol and our community so appreciates the partnership between the state, the city and the businesses who make magic happy the first Friday in December.

6:30 - 8 p.m.– Photo ops with Santa and Grinch at McFadden Plaza on the patio of The Fox Brewpub.

Note: schedule may be subject to change and is weather dependent

• Carson City Public Works for lighting the way to the holidays

• Carson City Elementary Music Teachers for their patience and commitment to keeping the tradition alive:

• The parents, grandparents, and friends of our fifth graders who come to cheer them on

• The downtown merchants who get into the spirit of the holidays