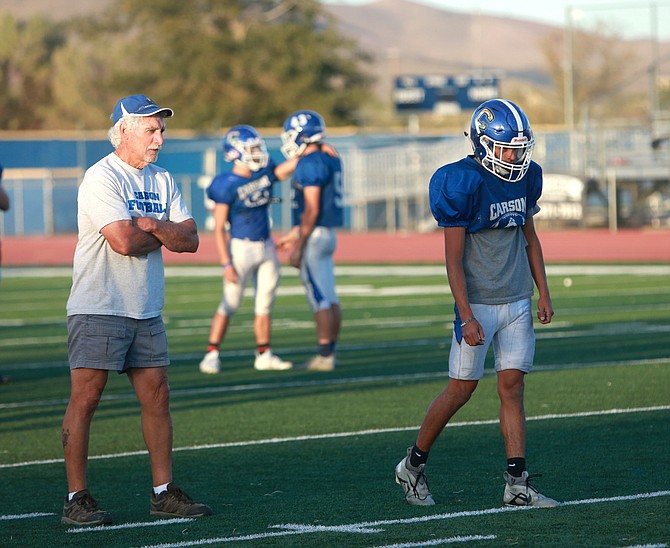 Carson High football has had a few regime changes in the last 40 years, much like most football programs across the country.

However, the one staple through those four decades of Senator football has been kicking coach Jim de Arrieta.

As the years have gone on, Northern Nevada football programs have always had to contend with strong kicking units from Carson High. Numerous kickers have not only had success on the Senators’ field, but several have gone on to kick in college.

They all agree that de Arrieta is an instrumental reason for that.

“He’s the best. I’ve known him most of my life,” said Raymond Sanchez, who graduated from Carson in 1996. “I’ve always wanted to be around him. He’s got that infectious attitude. Now, I emulate him, to be honest. He’s the kind of coach I want to be. Everything I was able to achieve was because of him.”

Sanchez is the special teams coach for Bishop Manogue and is just one of many who have valued their time with de Arrieta.

How he got to Carson

After that, he went on to play for Notre Dame, where he was on a national championship team under head coach Ara Parseghian.

When he returned to Northern Nevada to marry his high school sweetheart, de Arrieta found himself in Reno working at an insurance agency.

It didn’t take long for him to move to Carson and settle in. He got his start in 1983 under then-coach Carl Vinci.

One of the biggest staples of de Arrieta’s coaching style has been to let his athletes work with the tools they have. De Arrieta never wanted to force his way onto anyone.

There have been numerous noteworthy kicks throughout his career with the Senators.

The last two seasons, Isaac Avina has kicked at the Class 5A first-team level, knocking in field goals at a 66 percent clip, including a 51-yard boot against Douglas last week.

Barahona booted in a career-long field goal of 46 yards during his senior season in 2017. He also hit 131 out of 135 extra points he attempted while also converting 21 successful field goals over three years at the varsity level.

Sanchez went on to kick at Butte College for a season before kicking at Nevada.

“He’s the best. He turns out talent year after year,” Sanchez said oh his kicking coach. “He was there every step of the way.”

Staples of his style

Each summer, athletes who want to kick or have shown promise in the special teams department spend hours working with de Arrieta, perfecting their craft. Those players over the years have all grown to share a bond with their kicking coach.

“Every summer, I feel like I build a connection with him,” said Senator senior Parker Story. “He’s always been a great help to this Carson program and the school.”

“He goes with what you feel comfortable with and makes you perfect that,” said Avina.

Not only is he working with kickers and punters, de Arrieta has been teaching another specialized craft — long-snapping.

While the basic premise of long-snapping is similar across the board, comfort in the stance is crucial to success.

Long-snappers are tasked with short snaps on field goals and extra points, as well as a more typical long snap to the punter.

“I still think we’re the best special teams out here in Northern Nevada,” said current Carson High long-snapper Quentin Beck. “We’re out at 6 a.m. every summer. Our hard work has paid off.”

There’s hard work, but the players also get to know the man.

His current special teams unit cherished the little things such, as de Arrieta taking them out for food after practice or bringing drinks to the field.

“It’s definitely more than a morning practice,” said Story. “It’s bonding. It’s seeing the world from his eyes; (it) changes the way you see the morning.”

As de Arrieta has continued to build relationships among Carson High kickers and punters, they’ve learned nearly as much about him.

A long-standing joke is about de Arrieta’s cabin, which many players — current and former — are still hoping to visit.

“We did joke about going up to the cabin,” said Barahona.

“If he hears this, we still want to go out to his cabin,” said Beck.

His 40th season in the royal blue and white has seen the Senator football teams run the gamut when it comes to success on the field.

For de Arrieta, it’s the kids that have always kept him around.

“I’ve enjoyed it here, so that’s where I’ve stayed. They kept me around, which was kind of nice,” laughed de Arrieta. “I spend a lot of time with my group, so I get to know them real well. I’m still in touch with a lot of them, going way back.”

The memories de Arrieta has created in his time with the Senators will always stick with him, but for all the players who have come across ‘Coach D’, it’s his ability to be a father figure that will be their fondest remembrance.