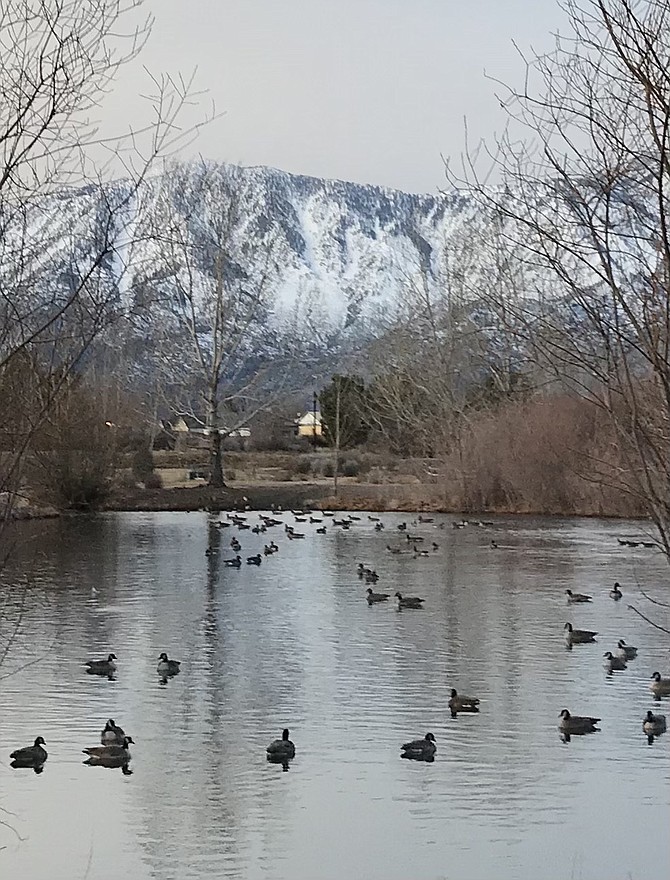 Ducks in Minden in 2021. HPAI, which circulates in wild waterfowl, has been detected throughout Nevada.

The Nevada Department of Wildlife, in coordination with the U.S. Department of Agriculture, has confirmed Highly Pathogenic Avian Influenza (HPAI) in wild bird populations in Nevada.

Some birds, including bird of prey species (owls, raptors, eagles), grouse, and domestic birds, such as backyard and commercial chickens, can have very high mortality rates, reaching up to 95 percent in domestic chickens. In addition, cases have occurred in various mammal species, and all mammals should be considered potentially susceptible.

“HPAI typically doesn’t have much of an impact on the overall population of waterfowl,” said NDOW Wildlife Veterinarian Nate LaHue. “However, with waterfowl hunting seasons approaching, we encourage hunters and other outdoor enthusiasts to take proper precautions to keep themselves and their pets safe and help prevent the spread of HPAI to domestic birds.”

HPAI has been detected throughout the U.S. since December 2021, and in July 2022, the USDA and Nevada Department of Agriculture confirmed the first case of the virus in Nevada in a backyard flock of domestic birds in Carson City. Since then, the disease has been confirmed in multiple geese and ducks in Reno, in bird of prey species across western Nevada, and during routine surveillance of waterfowl in western Nevada. The current strain of the virus appears to pose a low risk for human infection, but those who work with wild birds, especially waterfowl, are at higher risk of exposure and should wear appropriate personal protective equipment.

Simple steps can keep humans, pets, and domestic poultry safe, according to NDOW.

Hunters should never handle, consume, or bring home sick or dead waterfowl. They should wear gloves and eye protection when cleaning birds and do so in a well-ventilated area. They should remove intestines and discard soon after harvesting and avoid direct contact with them. Eating, drinking, or smoking while handling carcasses is ill-advised. Hunters should wash hands after handling game, clean equipment, and cook all game to an internal temperature of 165 Fahrenheit before consuming. Those planning to hunt in Canada should visit recent restrictions for harvested wild birds at the following link: https://www.aphis.usda.gov/aphis/newsroom/stakeholder-info/sa_by_date/sa-2022/canada-wild-bird-game-carcasses.

If birds appear sick, contact NDOW at (775) 688-1500. Sick birds can be found in urban or rural settings, and HPAI can be carried and passed on to other animals. Do not let dogs encounter sick birds or dead birds. Sick dogs should be provided with veterinary care. Those with domestic birds, especially backyard poultry, can follow the precautions outlined by NDA at agri.nv.gov/Animals/Avian/. Quarantine sick birds immediately and report to the USDA at (866) 536-7593 or the NDA Animal Disease Lab at (775) 353-3709, or email entrypermits@agri.nv.gov.

Commenting has been disabled for this item.