Churchill County in 2022: The year in review (part II) 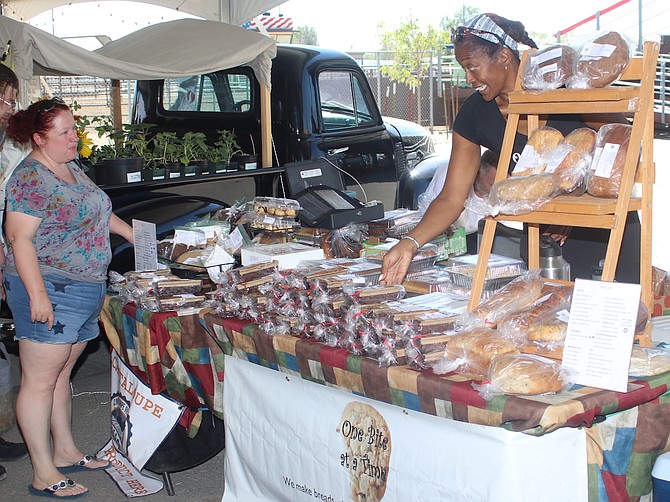 A record number of vendors set up their booths at August’s Fallon Cantaloupe Festival, which was one of the most successful festivals.

• Members of the Fallon Chamber of Commerce learned more about the Churchill County Museum and its offerings at its monthly luncheon.

• Churchill County School District employees from the 2021-22 school year are receiving a one-time 5% allocation of their base salary as appreciation for their hard work and dedication.

• The end of an era is coming for Roger Diedrichsen, who began the Fallon Pizza Barn in 1978. Diedrichsen has decided to retire. For 44 years, Fallon has embraced Pizza Barn.

• This year’s Fourth of July is having more a traditional feel to it than previous years. The Maine Street corridor will be a hub for old-fashioned fun and patriotism.

• Agriculture producers and others were invited to tour field plots in Northern Nevada where the University of Nevada, Reno and its partners are researching drought-tolerant and high-demand crops.

• The Nevada National Guard may have a small arms training range built at the Hawthorne Army Depot by fiscal year 2025.

• Two Fallon residents who were originally charged earlier this year with murder and three other counts pleaded guilty earlier this month in Tenth Judicial District Court to involuntary manslaughter and tampering with evidence. Judge Thomas Stockard released Robert Shannon Collins Jr. and Torri Anne Gibbs on their own recognizance.

• The Fallon Police Department continues to have an open investigation into a murder-suicide on July 25 that resulted in the deaths of two sailors assigned to the Naval Aviation Warfighting Development Center.

• Beginning the 2022-23 school year, Churchill County School District will prohibit the use of personal electronic devices by students within classrooms at the middle school and Churchill County High School.

• Congressman Mark Amodei addressed a meeting of the Fernley Republican Women on his annual swing throughout Northern Nevada.

• Mel Glover became the new Churchill County Museum director after a nationwide search to find a director to lead the museum.

• Even with a $20,000 infusion, the Churchill Animal Protection Society told county commissioners Aug. 17 the nonprofit group still needs help for housing and providing adoption services for the area’s cats and dogs.

• Poseidon’s trident pictured with a tribute to the USS Nevada, BB-36, was revealed at the Naval Air Warfighting Development Center with the creator of the idea design, John Galloway, university President Brian Sandoval and Rear Admiral Max McCoy, NAWDC’s commander and six players from this year’s Wolf Pack team.

• Chancy Williams and his Younger Brothers Band performed in Fallon at the Rafter 3C Arena on the second day of the Fallon Cantaloupe Festival and Country Fair.

• A Fallon man will remain in custody at a Reno-area maximum security psychiatric facility for another year until he returns to the Tenth Judicial District Court in Fallon for another proceeding on his competency. A competency hearing was held for John O’Connor, a 52-year-old Fallon man charged with a July 2018 murder of a fellow church member.

• U.S. Secretary of Transportation Pete Buttigieg, along with Under Secretary of Transportation for Policy Carlos Monje, Fernley Mayor Roy Edgington Jr., and other local and state leaders touted the grant for the Victory Project that will increase the efficiency of the supply chain, make goods more affordable and expand logistics and manufacturing capacity throughout the region.

• The Labor Day parade and breakfast “unofficially” signaled the end of the summer season.

• Port of Subs had a grand opening and formal ribbon cutting conducted by the Fallon Chamber of Commerce.

• Former Nevada Gov. Brian Sandoval reminded residents and friends at this year’s 9/11 Remembrance Ceremony to remember the evils of Sept. 11, 2001.

• With the Hazen fire declared officially out, state investigators began sifting through the piles of burned railroad ties to determine the cause of the blaze which sent plumes of smoke into the sky and closed U.S. Highway 50A for a period of time.

• The high school went into lockdown after the school’s office manager went into a staff restroom and died by suicide. The Fallon Police Department reported no foul play is suspected and at this time are not releasing any additional information.

• The Lahontan Valley News picked up a pair of first-place wins at the recently held Nevada Press Foundation’s awards banquet in Las Vegas. The LVN competes in the Rural division which consists of Nevada newspapers published no more than four times weekly.

• Both the Churchill County Commissioners and city of Fallon have approved a joint venture to build a new $560,000 building for the Churchill Animal Protection Society northwest of the city. Half of the building, according to County Manager Jim Barbee will be used for CAPS and the other half of storage.

• Churchill County Commissioners designated at their last meeting their top priority for development to the Governor’s Office of Economic Development. The board was required to review, rank and determine which projects to submit. After a short discussion, the commissioners will submit the Churchill County Civic Center Recreational Complex that comes with a $1.61 million price tag.

• Members of the Fallon Chamber of Commerce spent their October lunch meeting at the Oats Park Arts Center.

• U.S. senatorial candidate Adam Laxalt completed his first week of a two-week bus tour with local stops in Carson City, Fallon, Fernley, Minden and Virginia City the following day and vowed to speak to voters in every county of the state.

• November marks the beginning of Native American Heritage month and to kick it off Title VI Indian Education Liaison, Carlene Pacheco invited Stephen Frank, an elder and tribal member of the Fallon Paiute Shoshone Tribe, to sing the Shoshone Flag Song in his native language during morning announcements.

• The Nugget in Sparks hosted the 156th Annual National Grange Convention from Nov. 15-19.

• The Churchill Entrepreneurial Development Association and the Fallon Chamber of Commerce recently hosted an open house at their new location, 290 W. Williams Ave.

• The Lawton-Silva Post 1002 of the Veterans of Foreign Wars celebrated its 100th year anniversary on Nov. 19 at its hall on 405 S. Maine St, Since Nov. 16, 1922, the local VFW chapter has provided a century of service to Fallon and the Lahontan Valley community.

• The Fallon Trail Life Troop 1231 presented the Fallon Police Department and the Churchill County Sheriff’s Office with a respectful salute, a tray of treats made by the members and a thank you for the many officers, deputies, dispatchers and staff who keep our community safe.

• Harry “Bus” Scharmann was sworn in as Churchill County commissioner for District 3, replacing Greg Koenig, who was elected to the State Assembly District 38. He will serve out the remaining two years of Koenig’s term on the county commission.

• American Legion Post 16, which oversees the preparation of food and delivery of both Thanksgiving and Christmas dinners around the Lahontan Valley, has become a recognizable part of the holidays.

• Small Business Saturday, described as an American shopping holiday, occurred on the last Saturday in November.

• Fallon Chamber of Commerce and the Churchill Entrepreneurial Development Association are encouraging residents to stay in Fallon and patronize the small businesses.

• The Yuletide season officially began with the traditional Christmas tree lighting at the Maine Street Fountain followed by other events throughout the weekend and month of December. This year’s honoree to light the tree is 96-year-old Lillie Dyer Bright.

• The annual First Responders of Churchill County Holiday Food Competition gathered 12 tons of food on Sunday for the Out of Egypt Food Pantry. The agencies set up in front of Walmart and also had boxes to accept toys for the local Marine Corps Toys for Tots program.

• The House of Representatives passed their version on the NDAA during the summer and the House overwhelmingly approved a bicameral-negotiated update to the bill. The bipartisan vote was 350-80.

• The U.S. Senate passed the fiscal year 2023 National Defense Authorization Act which will now allow for the modernization and expansion of the Fallon Range Training Complex. Nevada Sens. Catherine Cortez Masto and Jacky Rosen announced the bi-partisan passage late Thursday afternoon with separate media releases. Rosen is a member of the Senate Armed Services Committee. The House of Representatives passed their version of the NDAA one week ago.

• More than 2,400 volunteers braved the frigid 22-degree temperature of Saturday morning to remember veterans interred at both the Northern Nevada Veterans Memorial Cemetery in Fernley and the Churchill County Cemetery east of Fallon as part of the Wreaths Across America program.

• This year, Fallon Ford-Toyota presented checks totaling $43,850 to 14 organizations that range from youth clubs and athletics to the Willian N. Pennington Life Center. Since the Pay It Forward program began in 2011, General Manager Tim Mitchell said the company has donated $446,200.

• A man accused of kidnapping and killing 18-year-old Fernley Naomi Iron in March was found competent to stand trial and ordered to appear at a two-day preliminary hearing in February. A Lyon County district judge in Yerington set Troy Driver's preliminary hearing for Feb. 16-17 in justice court in Fernley to determine whether there's enough evidence to bound him over for trial on charges including first-degree murder, kidnapping and sexual assault.

• A snowstorm on New Year’s Eve dropped up to 8 inches of the white stuff on the valley floor.