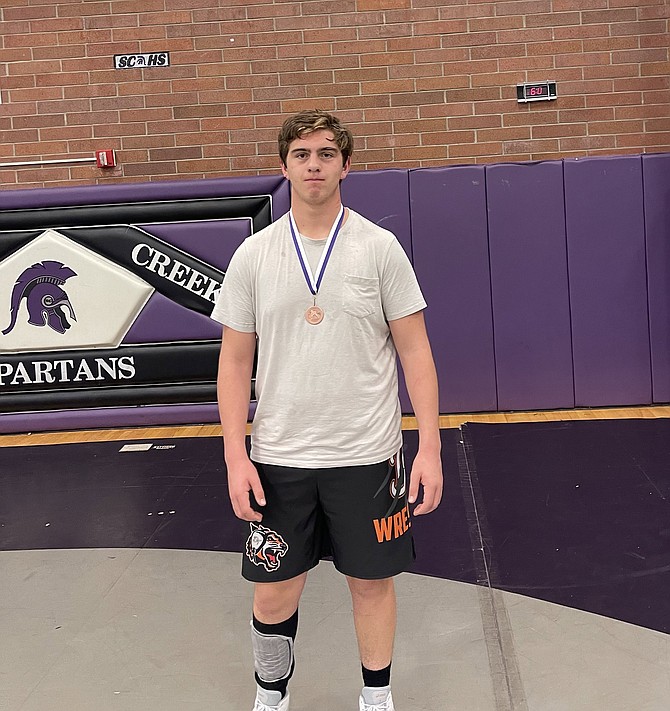 Michael White poses with his medal at the Spring Creek Invitational after taking sixth at the tournament in the heavyweight division over the weekend.

Several Tiger wrestlers found their way to the podium, including Sage Adie, who was second at 215 pounds.

Adie, who is 22-5 this season, pinned his way to the finals before falling in the championship.

Only one of Adie’s opponents was able to make it to the third round out of his four wins, as his quarterfinal opponent from Elko fell in 5:30.

At heavyweight, Michael White went 4-2 en route to the fifth place match, where he fell by pin.

All four of White’s wins for the tournament came via pin with none of his opponents making it past the 3:21 mark.

White is 18-9 on the season, per Track Wrestling.

At 175 pounds, senior captain Jaxon Nixon also finished sixth. Nixon was 4-1 through his first five matches winning all four by pin. Three wins came in the opening round.

Nixon fell by major decision and by pin en route to sixth.

Tekansik had an opening round bye then won by pin in 3:15 in the second round.

After falling in the quarters, Tekansik used another pin to advance to the consolation quarterfinals before falling by a 10-7 decision.

Victor Valdez put together eight points for Douglas at 132 pounds, winning three consecutive matches after falling in the opener.

Valdez bounced back with an 8-0 major decision win and two pins inside of 2:07 before getting bounced in the consolation.

At 106 pounds, Jasmine Tamondong scored six points for the Tigers with a win by fall in 26 seconds to open her tournament after receiving an opening round bye.

Kolton Zinn, at 144 pounds, added four points to the Tigers’ total with an opening round pin in 44 seconds.

Paul Carrion (150), Cody Highfill (126) and Gunnar Bleeker (113) each scored three points with a win in the consolation round.