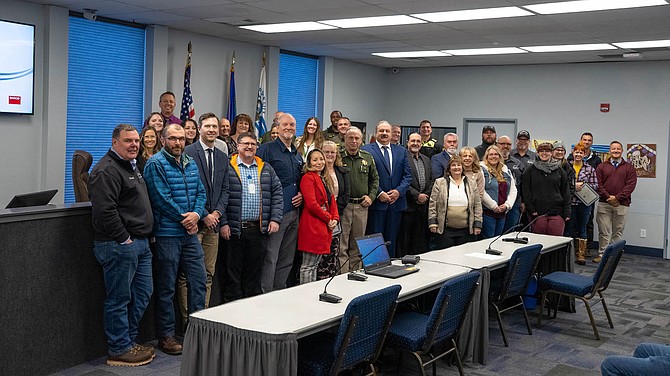 Nine employees were recognized by the Board of Supervisors on Jan. 19 for years of service and other awards. They were joined on the floor of the board room by coworkers from Community Development, the Carson City Sheriff’s Office, Public Works, Health and Human Services and other departments.
James Salanoa/Carson City

The Carson City Board of Supervisors lauded nine city employees Thursday for their respective lengths of service.

Senior Environmental Control Officer Kenneth Peck was commended for 15 years of employment, and re-elected Sheriff Ken Furlong was recognized for 20 years of service. Senior Construction Inspector John Platt was also recognized for 25 years with the city.

Additionally, Senior Project Manager Darren Anderson was named Employee of the Quarter and received a $200 check.

According to Carson City Human Resources, the Employee-of-the-Quarter Award recognizes “outstanding employees whose efforts have helped the city achieve the strategic goals adopted by the Board of Supervisors and who have demonstrated an effort to fulfill the city’s mission, vision and values.”