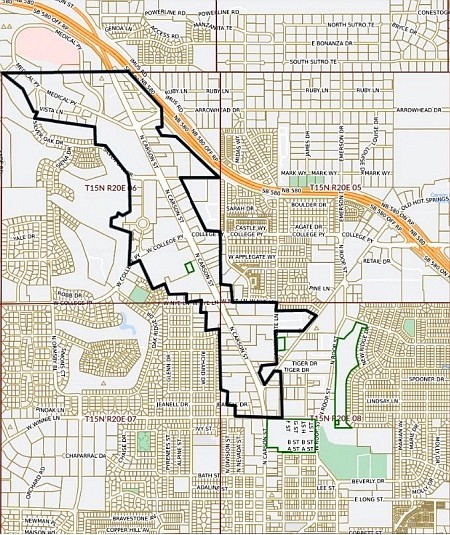 The Carson City Planning Commission will evaluate a request to allow marijuana retail stores in north Carson at its Wednesday meeting, which begins at 5 p.m. in the community center.

Currently, marijuana stores are allowed in general commercial and general industrial zones along a portion of South Carson Street and the eastern stretch of U.S. Highway 50. Green Thumb, which owns the RISE dispensary in south Carson, is seeking a location for a second store.

Strict location requirements for marijuana stores have been in place since 2014. Last year, the Board of Supervisors voted to allow four retail pot shops in the city, matching the number of licenses allowed under state law. They didn’t change location requirements, however.

City staff is recommending approval of the request, noting any specific marijuana store is still subject to review for a special use permit.

“The city now has six years of experience with medical marijuana dispensaries,” said a staff report. “Through implementation of design standards, they blend in with other community businesses and have not created compatibility issues.”

• Planning commissioners will consider a special use permit request from CSAC Acquisition Inc., for a marijuana cultivation facility at 3535 Arrowhead Drive. The property is zoned general industrial.

“The existing marijuana cultivation facility obtained an SUP in June 2015,” said a staff report “Ownership of the facility is proposed to change. Per Carson City development standards, a new SUP is required when there is a change in the owner or operator. There are no proposed changes to the previously approved operation.”

According to the staff report, the existing facility has 13 flowering rooms, four vegetation rooms, five drying rooms, nutrient storage areas and a final produce storage and safe room. The facility has 18 employees on site at any given time, and security includes access control, surveillance and alarm systems.

• Planning commissioners will consider a special use permit request from Alta Consulting for a 178-unit multifamily project on approximately 6.2 acres within the Silver Oak Planned Unit Development.

The property is zoned retail commercial and located on the southeast corner of Silver Oak Drive and GS Richards Boulevard. The special use permit would authorize multifamily use in the retail commercial zoning district.