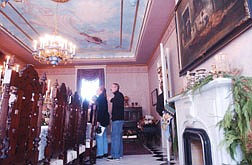 The main draw of the Bliss Mansion was the Dining room with its fire place and sky painted ceiling. The Bliss Mansion has nine fire places with one in each of the five guest rooms of the bed and breakfast. Photo by Brian Corley