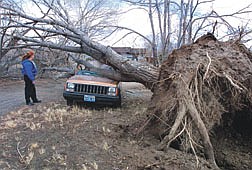 Carolann Stanford of Carson City looks over her damaged Jeep after an 80-foot cottonwood tree was uprooted by the wind in this weekend&#039;s storm. A second tree at the house also blew over damaging the front fence; no one was injured.