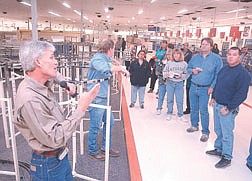 Kevin Kelley, left, auctions clothing racks at the old Wal-Mart to prospective buyers. Left over items were auctioned all day Saturday at substantial discounts to a small crowd of local business owners. Photo by Brian Corley