Bears found in Carson City to be released unharmed 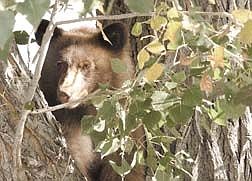 One of two bear cubs stares out from his perch in a tree over Winnie Lane Friday moring. The two cubs were accompanied by mom after taking to a nearby garbage and apple tree.