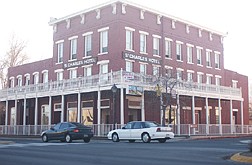 Cars drive by the St. Charles Hotel and what used to be the stage coach drop off station in Carson City. The hotel appears much the same as it did when it was built in 1859 except the town has gone through many changes including the paved roads in front of the hotel. Photo by Brian Corley