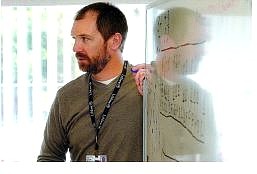 Rick Gunn/Nevada Appeal Alan Catron reviews the first measure of &#039;Bryce Canyon Overture&#039; with his band students at Fritsch Elementary School. His position as traveling band teacher to Fritsch, Bordewich-Bray and Seeliger elementary schools has been cut, so Catron will take over as music teacher at Bordewich-Bray.