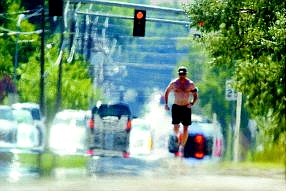 Brad Horn/Nevada Appeal Rob Robinson, of Carson City, runs up Fifth Street on Thursday afternoon. Temperatures continue to stretch in the high 90s and forecasters expect little change for the rest of the week.