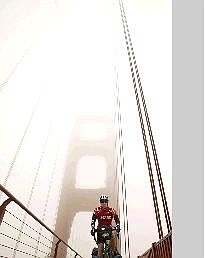 Photo submitted Nevada Appeal photographer Rick Gunn warms up on the Golden Gate Bridge on Thursday, a day before he officially begins his &quot;Wish Tour.&quot; Gunn will be collecting donations for the Make-A-Wish Foundation as he travels around the world for the next two years.