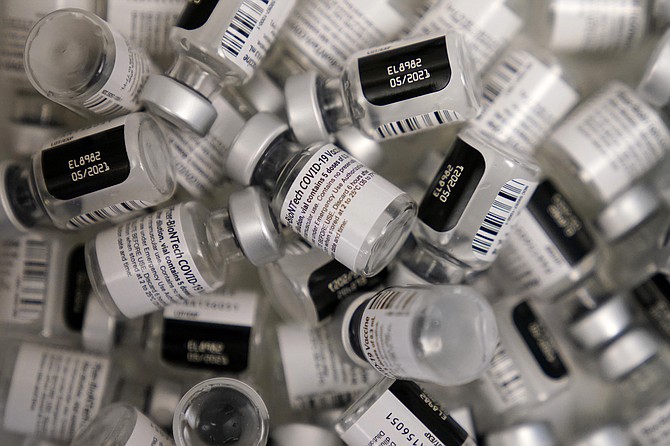 Empty vials of the Pfizer-BioNTech COVID-19 vaccine are seen at a vaccination center at the University of Nevada, Las Vegas on Jan. 22.

Dr. Mark Riddle of the UNR school of medicine said Monday there is growing evidence that not only do vaccines reduce infections and serious illness from the virus, but that they reduce transmission of the illness.

He said that evidence is coming through studies in the U.S., the U.K., Israel and Denmark.

“They’re not only preventing illness but also preventing spreading,” he said during the Monday COVID-19 update press conference. “For us to put an end to this and move on, we need to prevent it from spreading.”

Riddle said all three vaccines now available in the U.S. are highly effective — well over 90 percent — in preventing serious illness and hospitalization from the virus. Riddle pointed out that this isn’t test data but real-world data.

He said hospitalizations for those people who have been vaccinated “are almost zero.”

As of Monday, Karissa Loper, who heads Nevada’s vaccination program, said 1.53 million doses of vaccine have been put in people’s arms in Nevada. She said just under 39 percent of Nevadans have received at least one shot and 24.6 percent have been fully vaccinated.

Task Force Director Caleb Cage said daily numbers are higher than they’ve been recently but some of that increase is coming as backlogs of cases are reported to the state. The Nevada Hospital Association says there are 296 individuals hospitalized from the virus and the positivity rate for those tested is at 5 percent from a low 10 days ago of 4.2 percent. He said the 14-day rolling average of new cases was at 224.

But officials said the numbers don’t warrant calling it a surge.

With businesses and the economy opening gradually, “there is an expectation that the disease will spread because more people will be in contact with more people but it’s not something I would consider a surge,” said Kyra Morgan of the state Health and Human Services Department. “We’re actually performing really well.”

Asked if a slowing in case numbers is caused by fewer young people wanting a vaccination, Morgan said there is a higher proportion of young people catching the virus. But she said she attributes that to the fact that many more older individuals are already vaccinated.