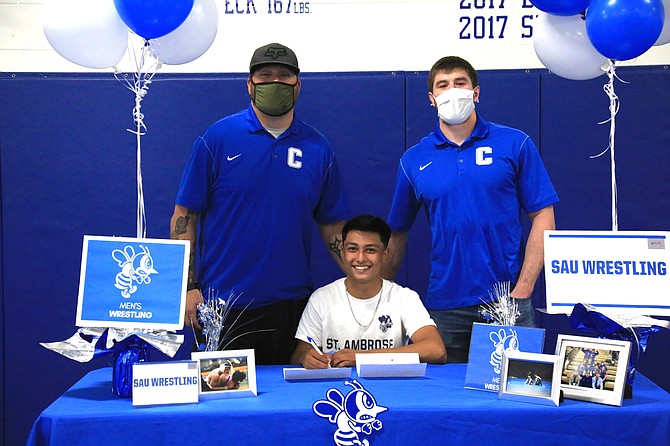 Carson High wrestler Ariel Vega didn’t get a senior season this winter due to the pandemic.
He didn’t get a final chance to win a state title that he desperately had been striving for.
Even with the unfortunate circumstances around his senior year, Vega kept working toward a decision in which he would keep wrestling in his future.
Friday afternoon in the Carson High School wrestling room, the outgoing Senator senior signed his official Letter of Intent to wrestle at St. Ambrose University in Davenport, Iowa next fall.
“I’m super proud of everything I’ve been able to accomplish,” said Vega. “I was trying to be a state champ. Being able to wrestle at the next level in college is just going to let me prove myself again. I wasn’t able to prove myself my senior year.”

Vega’s mindset and determination
There is a reason so many people use clichés on a regular basis.
They carry truth and sometimes the most accurate words are hard to find.
Clichés surround Vega, but it’s not because his coaches can’t find the words to describe him – it’s that they’re all true.
“Hard working, very easy to coach. Just a joy to have in the room,” said Carson High head coach Nick Redwine. “They’re getting a really good kid to wrestle for them and I couldn’t be happier.”
The determination of the 125-pounder is what earned him his college chance, too.
Vega will travel to Iowa without and family by his side, joining a St. Ambrose program (NAIA) that is just lifting off the ground for its first season in program history.

“I really like the coaches’ vision and what he has planned for the school. I think it’s super cool to have the opportunity to be the first national champion, or the first 125-pounder for that school,” Vega said.

However, the Fighting Bees have more ties to Nevada than their soon-to-be freshman.
First-year St. Ambrose head coach Bo Bettinson was born and raised in the Silver State and was a two-time wrestling state champion before graduating from Reno High School in 2011.
Bettinson took over as the program’s first head coach in late October 2020 and is anxious to get another Northern Nevada native in his wrestling room.
It was the first-year head coach’s ties to the area that allowed him to first hear about Vega.
A longtime friend of Bettinson trained with the Senator senior and was the first to pitch the Fighting Bees coach on the potential prospect.
“’I have a young man, who is a talented wrestler and works really, really hard. He would be a good addition to your program. Someone who can really help start it the right way,’” said Bettinson of the recommendation.
“I always love anytime Nevada boys get a chance to continue wrestling in college, whether it’s for me or anywhere.”
It’ll be a completely fresh start for Vega, who will fly into the premier wrestling states in the U.S.
There’s some anxious nerves for the outgoing senior – who is taking a leap for his next step – but the confidence continues to blossom in a wrestler who knows the best is yet to come.
“I’ve always had my family with me and my mom to cook me homemade meals,” said Vega, “but, I think it’s a really important step in my life and I think it’s something I need to experience for myself.”
Once on campus, Vega says he plans to pursue a business degree.